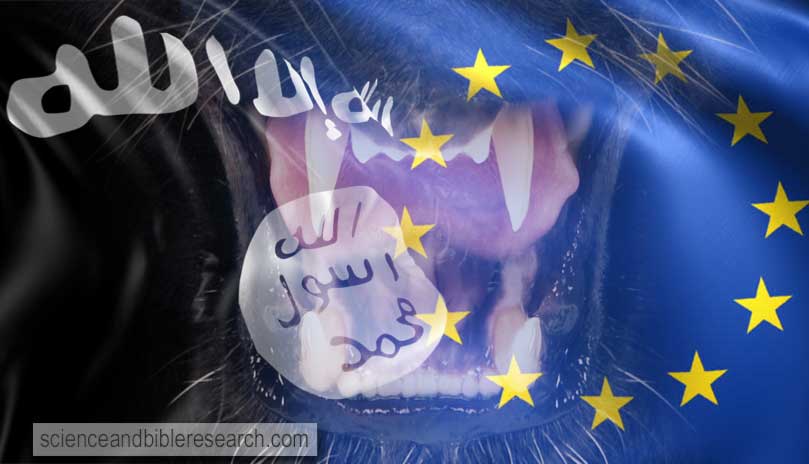 How should we interpret the apocalyptic writings contained in the Bible? Should we espouse a futuristic interpretation by forcing a modern world-view into an otherwise ancient text, as is the modus operandi of the Doomsday-Rapture theorist? Avoid the pitfalls of Dispensational Premillennialism and learn to interpret Scripture with Scripture!

In Revelation 17:3, we read that during the "time of the end" (Daniel 12:9), will exist a kingdom that is likened to a "scarlet beast that was full of blasphemous names, and it had seven heads and ten horns." The angel that showed this vision to the apostle John also revealed to him its interpretation.


The apostle John writes that the beast of the sea had seven heads which represented "seven kings. Five have fallen (emperors Julius, Augustus, Tiberius, Caligula, and Claudius), one is (emperor Nero), the other has not yet come (emperor Galba)... [but] must remain for only a little while" (Revelation 17:10). The eighth king "who once was, and now is not" (Revelation 17:11), was in reference to emperor Vespasian. Titus Flavius Vespasianus became emperor after the Julio-Claudian dynasty ended with Nero's suicide on June 9, 68 AD.  In effect, Vespasian's ascension to the throne revived the dead Julio-Claudian bloodline with the new Vespasian dynasty. It was in this way that the prophecy of the beast that "was, and is not, and is about to rise from the bottomless pit" (Revelation 17:8) was fulfilled.


John also writes that the Beast had ten horns which are "ten kings who have not yet received royal power, but they are to receive authority as kings for one hour, together with the beast" (Revelation 17:12). It is important to note that the ten horns were kings (Revelation 17:3-7), not kingdoms or nations of the world. They did not have their own kingdom. Neither were they ten regions of the world. Rather, in the context of the geopolitical Roman Empire-world, they were 10 generals and their armies that supported the Roman Empire in the siege against Jerusalem that ended with the destruction of the apostate city and its idolatrous temple in 70 AD.


The woman and the dragon

There are two signs which appeared in heaven to John in Revelation 12:1-6: the woman clothed with the sun and the great red dragon with seven heads and ten horns. The woman clothed with the sun represents the ancestral people of the Messiah "who keep God's commands and hold fast their testimony about Jesus" (Revelation 12:17). These are the "remnant" Jews (Romans 9:27, 11:5; see also Isaiah 10:22) and the "sealed" Jews (Revelation 7:4). They were also called the "firstfruits" redeemed from the tribes of Israel (Revelation 14:4). This collective group of Christ-believing Jews were protected from the Dragon in an undisclosed location for the duration of the Jewish-Roman War from 66-70 AD (Revelation 12:14). Historians later identified this place of refuge as Pella, Jordan .


The "great sign" which appeared in heaven of "a woman clothed with the sun, with the moon under her feet, and on her head a crown of twelve stars" (Revelation 12:1, Cf. Genesis 37:9) is a symbolic reference to the theocratic nation of ancient Israel which consisted of twelve tribes (Genesis 49:28, Revelation 21:12). The sun and the moon probably signify the nation's production of the Messiah (John 4:22) who would serve as a light to the Gentile nations (Luke 2:32, Act 13:47, 26:23).


The obvious timeframe reference is the first-century AD, since this is when the Christ-child was born. The other timeframe reference is contained in the description of "a great red dragon, with seven heads and ten horns, and on his heads seven diadems" (Revelation 12:3). This is almost identical to the description of the "beast rising out of the sea" (Revelation 13:1). The only difference is that the Dragon had seven diadems on his heads, while the beast had ten diadems on its horns. Conversely, Jesus is said to have many diadems on his head (Revelation 19:12). This is the time period during which the Dragon (i.e., the serpent, Satan, the Devil) was given authority over Roman Emperor Nero's Beast Kingdom (Revelation 13:2-4).


Thus, these two prophetic signs were already fulfilled when Jesus, the Son of God, was born of the virgin Mary circa 1 AD (Revelation 12:4), and ascended up to heaven beside his Father's throne circa 33 AD (Revelation 12:5). The sign concerning the great red dragon was fulfilled when the remnant of Christ-believing Israelites fled to the wilderness of Pella, Jordan where they were protected from the destroying Roman armies during the 1,260 days (Revelation 12:6) of the Jewish rebellion (66-70 AD).

Camp of the saints

In Revelation 20:7-9 we read that after the thousand years (i.e., an indefinite period of time) reign of Christ from his throne in heaven, Satan will gather the nations together (represented here as Gog and Magog) and "surrounded the camp of the saints and the beloved city" (Revelation 20:9).


A thorough survey of the Bible reveals that a camp is most often associated with the congregation of worshipers who wandered the desert after the Hebrew Exodus from Egypt (Exodus 16:13, Leviticus 4:12, Numbers 1:50, Deuteronomy 2:14, Joshua 1:11). This camp roamed the wilderness of Sinai for forty years "until all the generation that had done evil in the sight of the Lord was gone" (Numbers 32:13). This camp had no national borders nor capital city. It was to be kept holy because the Lord God walked in the midst of the camp (Deuteronomy 23:14), "in the midst of which I dwell" (Numbers 5:3). The "beloved city" is a reference to the body of believers, which includes both regenerated Jews and Gentiles. In fact, Jesus referred to his disciples as "A city set on a hill" (Matthew 5:14).


In Because the Time is Near, pg. 303 (2007), author John MacArthur disagrees and states that the beloved city is "Jerusalem - the place of the Messiah's throne and the center of the millennial world."  But how can a camp be a city, or how can a city be considered a camp? They cannot be both. The apostle John is using a common characteristic found in Hebrew literature called synonymous parallelism. In this style of poetry, the writer "says the same thing in different ways in order to convey its teaching."  Furthermore, Scripture explicitly declares that the new Jerusalem located in heaven above is the city of God (Hebrews 11:16, 12:22, Revelation 3:12, 21:2, 21:10, 21:22-23, 22:19), "whose designer and builder is God" (Hebrews 11:10).


Thus, "the camp of the saints and the beloved city" cannot refer to earthly Jerusalem. Rather, it is the collective, world-wide body of worshipers who have been justified by the precious blood of Jesus Christ (Romans 5:9).

In Revelation 9:3 we read that from the smoke which ascended out of the Abyss "came locusts on the earth." These locusts were allowed to torment unbelievers for 5 months (Revelation 9:4-5).


A thorough survey of the Bible reveals that locusts are most often associated with crop destruction, famine and pestilence (1 Kings 8:37, 2 Chronicles 7:13, Psalm 78:46, 105:34-35, Joel 1:4, Amos 4:9). For example, swarms of locusts were one of the plagues that God brought upon the Egyptians prior to the Hebrew Exodus (Exodus 10:12-15). Locusts are never used as a reference for demons.


The apostle John also writes that the locusts "looked like horses prepared for battle... horses rushing into battle" (Revelation 9:7-9). Similarly, the Lord describes locusts as "my great army" that he prophesied to send against rebellious Jerusalem (Joel 2:25) on the "day of the Lord" (Joel 2:1, 2:11, 2:31). Both the prophet Jeremiah and Job compare the horse to locusts (Jer 51:27, Job 39:20).


If we allow Scripture to interpret itself, we find that the locusts of Revelation 9 are not synonymous with demons. Rather, locusts provide a metaphorical representation of the famine and starvation inflicted upon rebel Jews by their Roman horse-driven attackers during the five-month-long siege in 70 AD.

In Revelation 8:8 we read that "something like a great mountain, burning with fire, was thrown into the sea..." Doomsday-Rapture enthusiasts espouse a literal interpretation and see this as an asteroid or meteor striking the earth. But if we allow Scripture to interpret itself, we find that ancient Babylon is also described as a "destroying [and burnt] mountain... which destroys the whole earth" (Jeremiah 51:25).

In Revelation 8:10 we read that "a great star fell from heaven, blazing like a torch..." This star is called "Wormwood" (Revelation 8:11). Some Doomsday-Rapture enthusiasts who promote a literal interpretation see this as an actual star or comet falling to earth. But this is impossible since the smallest known star in the universe is similar in diameter to Jupiter and would incinerate our earth before ever striking it. Also, there is no comet or star named "Wormwood" in the astronomical record. Irvin Baxter believes this is a reference to the 1986 explosion of reactor No. 4 that occurred in Chernobyl, Ukraine and exclaims, "It appears that the Chernobyl catastrophe was the fulfillment of the sounding of the third trumpet of Revelation 8!... the evidence that this is true seems undeniable."


If we allow Scripture to interpret itself, we find that this prophecy must refer to the star of the pagan gods (i.e., Ashtaroth) which apostate Jews worshiped (Judges 2:13, Acts 7:43). In the Bible, "Wormwood" is a reference to the bitterness that accompanies the rejection of the Lord (Deuteronomy 29:18, Lamentations 3:15, Amos 5:7, 6:12).