Christians for Trump: no leg to stand on 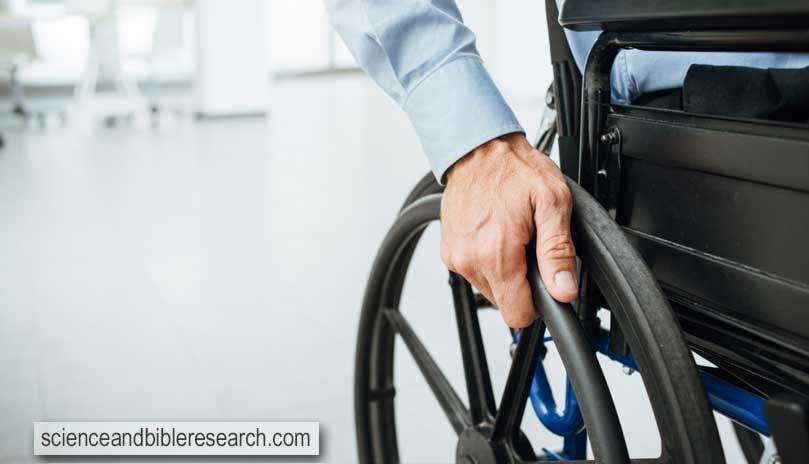 Businessman in wheelchair, hand on wheel close up, office interior on background (Photo by stockasso)

Should Christians vote for the supposed, lesser of two evils? Can we, as the body of believers in Christ Jesus, make a common sense, conscience-based decision for Christ first and foremost, and America second?

...on this rock I will build my church, and the gates of hell shall not prevail against it.

Christians are concerned, and somewhat fearful, of the so-called greater of the two evils becoming president and extinguishing any and all vestiges of Christianity in America. Although a valid matter, we know from history, and also according to Jesus' statement above, that not even the gates of hell will extinguish the presence of Christianity from this earth. For example, pagan and oppressive States like ancient Rome could not prevent the gospel of Jesus Christ, while still in its infancy, from penetrating the far-reaches of the Empire.


So how should a Christian vote? Is it to safe-guard the free practice of our traditions and religion? Or rather, is it more important to preserve the validity of our testimony for Christ? In the following article, we shall investigate several of the more important issues that are currently being used by Christians to support the scandal-ridden Republican Presidential nominee, Donald Trump. This includes modern Israel and the Jews, abortion and Trump's promise to fill the vacancy on the US Supreme Court with a conservative Justice in the hopes of overturning Roe v. Wade, same-sex marriage, and freedom of association (i.e., baking gay wedding cakes).

Christians often want to make the modern Jewish State of Israel a deciding factor on whether or not they will support a presidential candidate. They frequently cite passages like Genesis 12:1–3 where God promises to "bless those who bless you" and curse the nations that curse Israel. This contention was referenced in the Southern Baptist Convention (SBC) resolution titled, On Prayer And Support For Israel (St. Louis, MO - June 14-15, 2016). It's theological implications are discussed at length here.


Trump has been able to capitalize on this fundamentalist view when he stated that his administration would "stand side-by-side with the Jewish people."  However, only months prior, Trump refused to take either side and abstained from saying whether the Palestinian Arabs or Israel was at "fault" for the conflict in the region , and would rather be the "neutral guy" regarding the whole situation.


Trump's effort to enlarge his standing with Christians went further when he made remarks about recognizing Jerusalem as Israel's capital and moving the American embassy from Tel Aviv to Jerusalem.  Trump's idea of moving the US embassy to Jerusalem or making Jerusalem the capital of Israel will likely cause more conflict and bloodshed in the region since Muslims also have a legitimate claim to the ancient city. For example, beginning in 640 AD, multiple Muslim Caliphates (political-religious state)  ruled over Jerusalem until 1099 AD (461 years). The Ottoman Turks also ruled over the ancient city for another 400 years from 1517-1917 AD.


The premise of supporting national Israel by favoring her and the Jews above all other nations in the region is unfounded according to Scripture. This is because the residence of his chosen people and the city that God delights in is the new and holy Jerusalem located in heaven (Hebrews 11:16, Revelation 3:12, 21:2-10), not at 31.7683° N, 35.2137° E on planet earth. The apostle Paul tells us that earthly Jerusalem represents the unregenerate, an example of bondage (Galatians 4:25), while the heavenly version is the actual home of Christians:

But the Jerusalem above is free, and she is our mother. The apostle Paul to the Galatians in Galatians 4:26 (circa 48-55 AD)


From the passage above, it is clear that the new and holy Jerusalem located in heaven is the eternal home of both Christ-believing Jews and Gentiles. So from a Biblical point of view, the status of earthly Jerusalem is not worth fighting and dying over.


Israel is not weak and in need of support from America. According to a recent analysis, the modern state of Israel is ranked the number 1 most powerful nation in the Middle East.  The Israeli military is ranked the 14th most powerful worldwide.  That's a lot of muscle for one of the smallest countries in the world  with a land area the size of New Jersey. See how both Democrat and Republican foreign interventions lead to persecution and terrorism.


The fact of the matter is that the US has already been helping Israel. Recently, President Obama gave Israel a record $38 billion in military aid, "the largest of its kind ever."


We see then, that Christians should not base their support of scandal-ridden Trump simply due to his recent, and suspicious, advocacy of Israel.

In 1999 when Trump was interested in becoming president, he stated that he was "very Pro-Choice" and when asked, said he would not ban partial-birth abortion . During the same time, then-Republican Governor Gary Johnson, now running for president as a Libertarian, signed a law that banned late-term abortions, and supported parental notification and counseling.


Gary Johnson is Pro-Choice but personally believes in the sanctity of the unborn.  He has consistently stated that he would appoint Justices to the Supreme Court that would follow the original intent of the Constitution (e.g., Justice Clarence Thomas).  According to his Our America website, Johnson also believes that Roe v. Wade should be overturned in order to give individual states the opportunity to decide on matters of the unborn.  This is consistent with Johnson’s current preference for nominating someone like Justice Clarence Thomas to the US Supreme Court.  Back in 1992's Planned Parenthood v. Casey, Thomas (along with Rehnquist, White, and Scalia), dissented from the majority ruling and wrote, "We believe that Roe was wrongly decided, and that it can and should be overruled consistently with our traditional approach to stare decisis in constitutional cases."


Contrary to some Christians who attempt to rationalize their support for scandal-ridden Trump on account of filling the vacancy of the Supreme Court with a conservative Justice (e.g., Franklin Graham , Mike Huckabee , Jerry Falwell Jr. ), Republican-appointed conservative Justices did not prevent the federalized legalization of abortion, nor have they chosen to overturn Roe v. Wade when provided the opportunity.

Lastly, if God wants to end abortion in America, he doesn’t need to rely on overturning Roe v. Wade. God works through his Church to influence the heart and mind of individuals and bring about the perfect righteousness of Christ. God can save any of the unborn by simply changing the soul of the mother. Even more, surgical-induced abortion rates have declined to an all-time low under the presidency of Pro-Choice Democrat Barack Obama (2008-2016). That was after peaking in 1990 to a historic high under Pro-Life Republican President George H. W. Bush (1989-1993). We see then, that Republican-appointed Justices and Pro-Life Republican Presidents don't always live up to Christian expectations. It is naive to believe that scandal-ridden Trump will somehow "break the mold" and end abortion in the US.

This is another hot-button topic with the Christian right. Evangelical voters are under the impression that redefining the traditional, Biblical definition of marriage will incur the judgment of God upon America. This failed view of the supposed, "God-State relationship", is refuted here. If we learn anything from church history, it is that Christians should not seek to turn America into a theocracy and use the State to promote or force its views above those of non-believers.


On freedom of association

Although the government's job is to protect the inherent God-given rights of individuals, business owners have a responsibility to abide by established commerce laws. It is neither good commerce nor Christ-like to refuse to bake a cake for a same-sex wedding. America is not a country solely inhabited by Christians so business owners should expect to faithfully provide services and products for someone who's lifestyle they might not agree with. The proper relationship between Christians and non-Christians in a business setting is further discussed here.


CITE:
Sabz, S. (2016, November 5). Christians for Trump: no leg to stand on. Retrieved from https://scienceandbibleresearch.com/christians-for-trump-no-leg-to-stand-on.html