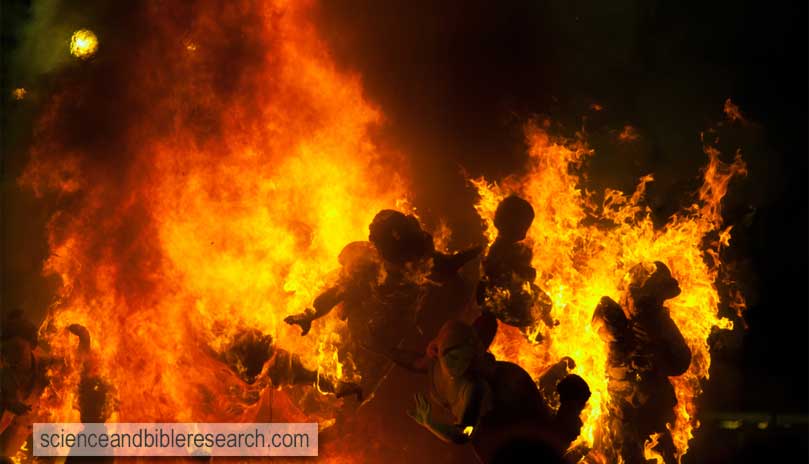 Roman soldiers erect their eagle ensigns upon the towers facing the temple and make "joyful acclamations for the victory they had gained"  against the Jewish rebels. Marching through the lanes of the city, Roman fighters killed the remaining rebels and "burnt every soul"  with fire, reminiscent of Ezekiel's prophecy concerning the destruction of the 1st (Solomon's) temple by the Babylonians when the apostate Jews were used as "fuel for the fire" (Ezekiel 21:32). So great was the slaughter against this apostate generation of Jews (Luke 11:50-51) that the "whole city run down with blood, to such a degree indeed that the fire of many of the houses was quenched with these men's blood."  The Romans had so thoroughly desolated the Jews and their city that Josephus also reports, "the people were now slain, the holy house was burnt down, and the city was on fire, there was nothing further left for the enemy to do."  The fire that raged throughout the forsaken city brings to mind Malachi's prophecy of a day "burning like an oven... shall set them ablaze" (Malachi 4:1) on the "day of the Lord." (Malachi 4:5).


Pondering the enormity of the Roman victory, General Titus humbly stated that, "We have certainly had God for our assistant in this war, and it was no other than God who ejected the Jews out of these fortifications; for what could the hands of men or any machines do towards overthrowing these towers?"  Jewish historian, Josephus, describes that Jerusalem "was so thoroughly laid even with the ground by those that dug it up to the foundation, that there was left nothing to make those that came thither believe it had ever been inhabited."  Jerusalem and its temple were destroyed on the eighth day of the month Elul in the year 70 AD, which corresponds to August 31 on the Gregorian calendar . The Jews of today commemorate the destruction of both Solomon's Temple and Herod's Temple on the ninth day of Av.


As such, the Christian population outnumbered that of ethnic Jews by the 7th century AD during the Umayyad dynasty,  as "Nazareth or Bethlehem, were almost exclusively Christian; and in Jerusalem itself... the Christians remained in the majority." (Steven Runciman, A History of the Crusades, Volume 1, 1987, pg. 24)


The apostle John's "new heaven and a new earth" (Revelation 21:1) will be fulfilled when Jesus returns to earth in physical, bodily form (Second Coming) to raise the dead and preside over the final judgment (Revelation 20:11-15). Until then, the holy Jerusalem in heaven is the new home of the Christ-believing family of God (Galatians 4:26, Hebrews 11:16, Revelation 3:12, 21:2-10).