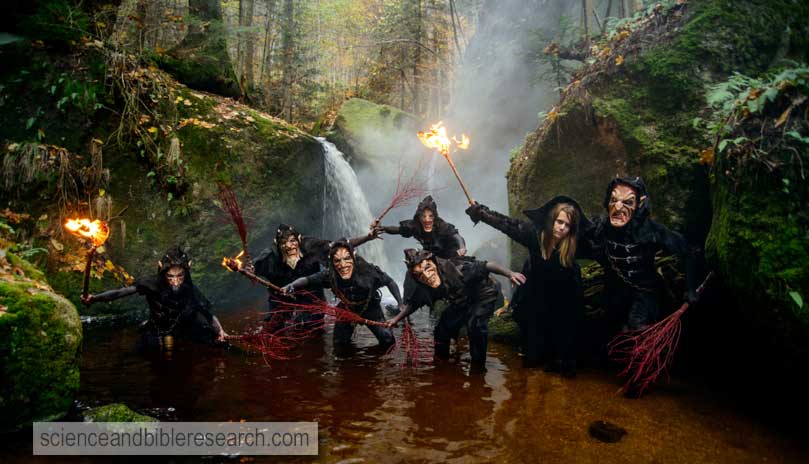 Demons group at the entrance of Hades (Photo by photofrankyat)

Does the Bible predict that demons will inundate the earth and terrorize non-Christians left behind after a supposed mass rapture event?

The fifth angel sounded his trumpet, and I [John] saw a star that had fallen from the sky to the earth. The star was given the key to the shaft of the Abyss. When he opened the Abyss, smoke rose from it like the smoke from a gigantic furnace. The sun and sky were darkened by the smoke from the Abyss. And out of the smoke locusts came down on the earth and were given power like that of scorpions of the earth.

The apostle John to the seven churches of Asia minor in Revelation 9:1-3 (circa late-60's AD)

The Revelation 9 passage above informs us that what came out of the smoke from the Abyss were locusts, not demons. In the Bible, locusts are most often associated with crop destruction, famine and pestilence (1 Kings 8:37, 2 Chronicles 7:13, Psalm 78:46, 105:34-35, Joel 1:4, Amos 4:9). Locusts are never used as a reference for demons. For example, swarms of locusts were one of the plagues that God brought upon the Egyptians prior to the Hebrew Exodus (Exodus 10:12-15). Concerning the locusts' power resembling that of scorpions, Jesus gave his disciples power over scorpions when he sent them out to preach the gospel (Luke 10:19).


Dispensational Premillennialists (a.k.a. Doomsday-Rapture theorists) believe the locusts in this passage are symbolic of demons. For example, in Because the Time is Near, pg. 162 (2007), author John MacArthur states that "these were not ordinary locusts, but demons, who, like locusts, bring swarming destruction."  Before this, author Hal Lindsey in his book The Late Great Planet Earth, pg. 42 (1970), erroneously interpreted these locusts to symbolize Vietnam-era attack helicopters.


The apostle John also writes that the locusts "looked like horses prepared for battle... horses rushing into battle" (Revelation 9:7-9). Similarly, the Lord describes locusts as "my great army" that he prophesied to send against rebellious Jerusalem (Joel 2:25) on the "day of the Lord" (Joel 2:1, 2:11, 2:31). Additionally, John reveals that the army of locusts "were not allowed to kill them [those people who did not have the seal of God on their foreheads] but only to torture them for five months" (Revelation 9:4). Josephus records that Roman general Titus began his siege against Jerusalem in the year 70 AD during the feast of unleavened bread , which began on April 12th and ended on the 19th (Nisan 15-22). Titus succeeded in the desolation of Jerusalem and its 2nd temple and took full control of the city about 5 months later on August 31, 70 AD (eighth day Elul) . During the five month long siege, Jerusalem was transformed into a concentration camp as the apostate Jews (i.e., "those people who did not have the seal of God on their foreheads") were imprisoned therein by the Roman soldiers and forced to endure famine and mass starvation . Humans can survive near-starvation (with hydration) for many months to years. This has been shown historically in concentration camps and during famines. The dire condition of the Jewish rebels who remained inside the city walls to fight against the Romans is well documented by Josephus:

In the mean time, the Jews were so distressed by the fights they had been in, as the war advanced higher and higher, and creeping up to the holy house itself, that they, as it were, cut off those limbs of their body which were infected, in order to prevent the distemper's spreading further. Flavius Josephus in The Wars of the Jews, 6.164


Now of those that perished by famine in the city, the number was prodigious, and the miseries they underwent were unspeakable... their hunger was so intolerable, that it obliged them to chew every thing, while they gathered such things as the most sordid animals would not touch, and endured to eat them; nor did they at length abstain from girdles and shoes; and the very leather which belonged to their shields they pulled off and gnawed. Flavius Josephus in The Wars of the Jews, 6.193


Thus, if we allow the Bible to interpret itself, we find that the locusts of Revelation 9 are not synonymous with demons. Rather, locusts provide a metaphorical representation of the famine and starvation inflicted upon rebel Jews by their Roman horse-driven attackers during the five month long siege.