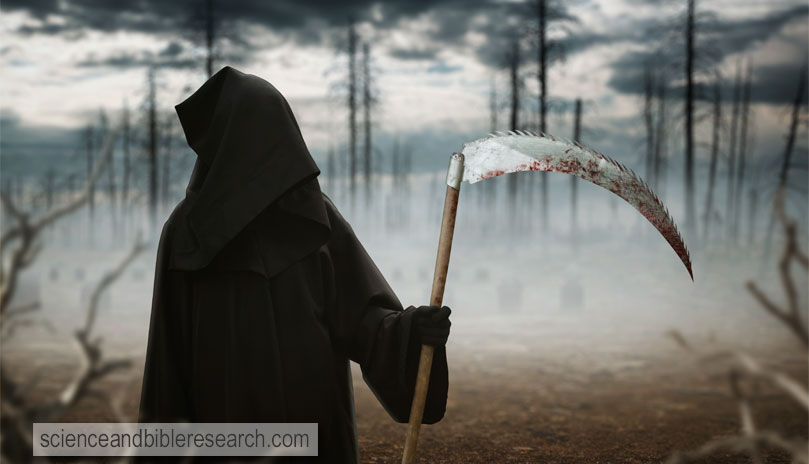 Death with a scythe in dark misty forest (Photo by NomadSoul1)

It looks like the Pre-Tribulation Rapture crowd is at it again. Just like the combining of the terms lifespan and generation, now they're confusing the words tribulation and wrath in the Bible. So what's the difference?


Their recent attempt to commingle tribulation and wrath seems to have been initiated by the documentary, Before the Wrath (2020), narrated by Kevin Sorbo. The film features interviews by notable Pre-Tribulation Rapture teachers, including Jan Markell, Amir Tsarfati, Jack Hibbs, and J.D. Farag. These individuals claim the rapture will occur before the tribulation (hence the name, Pre-Tribulation). So why are they featured in a documentary promoting a pre-wrath rapture of the church?


The film claims to reveal new evidence in support of the rapture that is sending "shock waves" throughout the theological community. But it flopped at the worldwide box office, earning back just a third of its budget. And it didn't produce any "shock waves" either. But the film's financial shortcoming and failed theological impact are not important. What is important, is to understand that there is indeed a difference between the terms tribulation and wrath. In this article, we shall expose another one of their desperate attempts to reinvigorate support for the, now considered fringe, Pre-Tribulation Rapture theory.

The Greek words thlipsis and orge refer to the English words tribulation and wrath respectively. As you can see, they are two different words. And they also have different meanings. For example, Strong's Lexicon defines thlipsis as "pressure (literally or figuratively):—afflicted(-tion), anguish, burdened, persecution, tribulation, trouble." Conversely, orge is defined as "properly, desire (as a reaching forth or excitement of the mind), i.e. (by analogy), violent passion (ire, or (justifiable) abhorrence); by implication punishment:—anger, indignation, vengeance, wrath." The contexts in which they are used is also different, as we shall see next.


Tribulation is for Christians

Not only are their definitions different, but so are the contexts in which the terms thlipsis and orge appear. For example, the Bible explicitly states that believers are not exempt from tribulation, but are expected to endure and persevere through it (Mat 24:9, Mat 24:21, Jhn 16:33, Rom 12:12, Rev 1:9, Rev 2:9-10, Rev 7:14). Even more, Jesus explicitly tells his disciples that, not before, but "Immediately after the tribulation of those days..." (Mat 24:29), he will send his angels to "gather his elect from the four winds..." Jesus previously called that tribulation, the "great tribulation" (Mat 24:21), which he advises them to escape to the mountains (Mat 24:16), rather than remain within the besieged city of Jerusalem (Mat 24:31). In addition, Christ warns his disciples about falling away as a result of tribulation (Mat 13:21).


Wrath is for the ungodly

As opposed to tribulation, which believers are expected to endure, God's wrath is reserved for unbelievers (Rom 1:18, Eph 5:6, 1Th 5:9). For example, Jesus states, that as a result of the Jews' rejection of the Messiah and their subsequent persecution of his disciples, there will be "wrath against this people" (Luk 21:23). Jesus links this wrath to the "days of vengeance, to fulfill all that is written" (Luke 21:22). Note that Jesus did not say he would rapture the church in order to escape God's wrath, but instead, his disciples were told to "flee to the mountains" (Luk 21:21). Furthermore, the apostle John records that, at the coming of Christ, the ungodly will wish for the rocks to fall on them in order to be hidden from the "wrath of the Lamb" (Rev 6:16). Not only is the wrath of God a physical manifestation of his judgment on non-Christians, but it is also abiding on them right now, in a far lesser degree, because of their unbelief. That is even now, while the ungodly seem to enjoy life (Mat 5:45), are nonetheless under the wrath of God (Jhn 3:36). God's wrath will also be experienced in hell, but in full measure forever (Rev 14:10, Rev 20:10).

Just nine months after the documentary, Before the Wrath (2020), came out, Tsarfati and Markell (who were both interviewed in the film) aired a one hour video called, Prophecy Roundtable: In Defense of the Pre-Trib Rapture (it seems like their still sticking to the Pre-Trib moniker).

Because the tribulation period, the time of Jacob's trouble, is going to be so horrific, so unbelievably hellish, that first of all, God would never put his Bride through that... the church is spared that kind of wrath... the Bible spells that out... for sure Revelation 3:10... the believers/church is not appointed unto God's wrath... the church is always appointed unto man's wrath and Satan's wrath, but never God's wrath Jan Markell in Prophecy Roundtable: In Defense of the Pre-Trib Rapture (time 7:10, video source, 12/19/2020)


Tsarfati responds by sharing his screen with the quotation in Revelation 3:10 that Markell referred to. Anyone can see that the passage contains neither the words tribulation nor wrath. Jesus simply tells one specific church, the church in Philadelphia, that he would keep them "from the hour of trial [peirasmos] that is coming on the whole world, to try [peirazo] those who dwell on the earth." Tsarfati believes this refers to the rapture, saying, "Why? Because we're not gonna be here anymore" (time 8:15).


However, a thorough consideration of the entire letter to the church in Philadelphia leads us to a different conclusion than Tsarfati's. For example, Jesus never tells the church they would be taken out of the world. In fact, just two verses later, he encourages them by saying "The one who conquers, I will make him a pillar in the temple of my God" (Rev 3:12). It seems the church must remain on earth, while God tests the world, in order for them to conquer the world by faith (1Jo 5:4).


Markell and Tsarfati wish to convince us that the church will not be on earth when God pours his wrath out. But this is biblically erroneous. For example, God always kept his remnant on earth during his wrath on apostate Israel in the Old Testament. For example, God instructed ancient Israel to submit to his servant, King Nebuchadnezzer (Jer 27:6) and go into captivity in Babylon, rather than trying to defend Jerusalem or flee to safety in Egypt (Jer 42:18). Those who did not heed the Lord's command, were destroyed by the armies of Babylon and the Chaldeans, the instruments of God's wrath (Jer 21:4-6). The same was true in the New Testament when Jesus instructed his followers to flee to the mountains (Mat 24:16, Mar 13:14, Luk 21:21), rather than stay in Jerusalem to fight against the Roman siege.


So we see then that the terms tribulation and wrath have different meanings and are used in different contexts. The two are never used interchangeably, as Pre-Tribbers wish to believe. The church (aka Bride of Christ) will remain on earth during tribulation and is expected to conquer through faith in Christ Jesus. Conversely, during the time of God's wrath, Christians will not be raptured, but will be escorted out of harms way until God's wrath is fulfilled on his enemies.