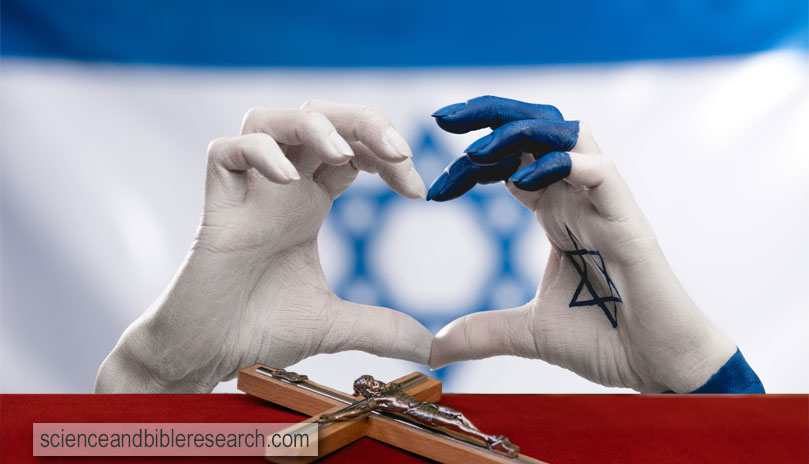 Heart-hands around Star of David (Photo by LightFieldStudios). Jesus on cross (Photo by twenty20photos).

Does God bless those who bless the Jews and Israel? Pre-Trib Zionists lament the fact that most Christian denominations today teach that the church has replaced Israel. But this is a misnomer because the church did not actually "replace" Old Testament Israel. Rather, the church is the continuation and fulfillment of ancient Israel. This is because God's plan all along was to save only a remnant of the ancient Jewish nation (1Ki 19:18, 2Ki 19:31, Ezr 9:8, Isa 11:11, Jer 31:7, Rom 9:27, Rom 11:5). Even today in the church, there is a remnant of true believers mingled in with false converts (Mat 7:21-22, Mat 13:30, Mat 25:1-2, Luk 6:46). This joining together of believing Jews and Gentiles into one flock in Christ Jesus (Jhn 10:16) is the mystery that was hidden in the Old Testament, but has since then been revealed to us (Eph 3:5-6). This is why the apostle Paul proclaims peace to all who are a new creation in Christ, calling them the "Israel of God" (Gal 6:16). Conversely, God's enemies have no such peace (Isa 48:22, Eze 13:16).


Pre-Trib Zionists contend that the church and Israel are separate entities, and that God will again, (for the 3rd time) give the Jewish nation, as a whole, another chance to worship the one true God. This Jewish-centric theology in effect replaces the church with Israel, as it claims that it is not Christ and his church who bless the world, but secular Israel. In a sermon called, Israel: God's Gateway to Blessing, Hagee places Israel and the Jews above the Christian church by saying that even the church must bless Israel and the Jews in order to be blessed:

The blessing of blessing Israel brings a supernatural prosperity to the person, to the church, to the nation, that truly blesses the Jewish people. John Hagee in Israel: God's Gateway to Blessing (time 0:14, September 29, 2019)


So, according to Rabbi Hagee, the church must bless Israel and the Jewish people in order to obtain "supernatural prosperity." Hagee's proof-text is Genesis 12:3, which he says is "the golden key to releasing God's supernatural prosperity on your life" (0:25). In the verse, God is speaking to Abram upon his call to leave his family in Ur "to the land that I will show you" (Gen 12:1). God tells Abram: "I will bless those who bless you, and him who dishonors you I will curse, and in you all the families of the earth shall be blessed" (Gen 12:3). According to Hagee's interpretation, God is ultimately referring to the Jewish people and the nation of Israel, who would come out of Abram's loins. However, the apostle Paul already explained how "in you [Abram] all the families of the earth shall be blessed" in his letter to the Galatians:

Know then that it is those of faith [in Jesus Christ] who are the sons of Abraham. And the Scripture, foreseeing that God would justify the Gentiles by faith, preached the gospel beforehand to Abraham, saying, "In you shall all the nations be blessed." So then, those who are of faith are blessed along with Abraham, the man of faith. The apostle Paul to the Galatians in Galatians 3:7-9 (48-55 AD)


It could not be any clearer than Paul's exposition. The true sons and daughters of Abraham are those who believe in Christ (Luk 13:16, Luk 19:9), whom Abraham himself looked forward to in faith (Jhn 8:56). Notice that the Jews nor Israel are ever mentioned in the passage as a source of blessing. Rather, it is by believing in Christ Jesus that God blesses a person, and by extension, through the power of the Holy Spirit working through his church, his benevolence shines on the nations (Mat 5:16). It is by blessing Christians that one receives blessings from God. Jesus also taught this when he said that anyone who blesses one of his disciples by supplying them with even a cup of cold water will not lose their reward (Mat 10:42). Hagee's twisted Jewish-centric ideology heretically supersedes Paul's Holy Spirit inspired exposition.