Chosen people: Is God a racist? 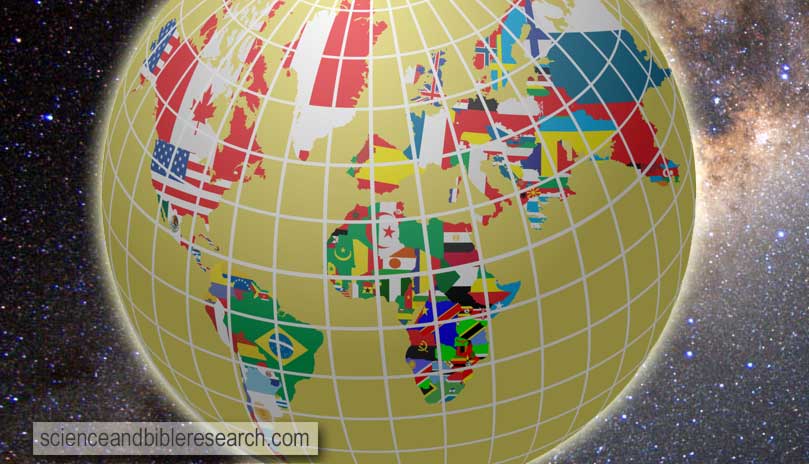 All flags in globe form, vector illustration (Vector by bakelyt)

Does the God of the Bible favor a particular race, based on physical descent, over other people-groups of the world? Or, is he an all-inclusive God who does not discriminate against anyone on the basis of race, gender, religion, income, education, color?

According to the passage above, the Bible seems to reveal a God who does not favor one particular race of people over another. However, is the Scripture consistent with earlier Old Testament passages (i.e., prior to 722 BC) where God clearly identifies Himself with the people of Israel (Exodus 5:1)? Let us explore the Bible and consider the contextual and historical rationale for God's apparent separation of the people of Israel as his, "treasured possession" (Exodus 19:5). In so doing, we will discover the all-inclusive, non-discriminatory (Amos 9:7) interpretation of the phrase, "God of Israel" (Exodus 5:1).


The first incident where God referred to a specific race as "my people" was in regard to the Hebrews while they were slaves in Egypt:

The Lord said, "I have indeed seen the misery of my people in Egypt. I have heard them crying out because of their slave drivers, and I am concerned about their suffering." The Lord to Moses in Exodus 3:7 (circa 1260 BC)


God heard their groaning and claimed them as his people because he remembered the covenant he made with faithful Abraham (Romans 4:13), when God initially foretold of his descendants' future plight as slaves (Exodus 2:23-24, Genesis 15:12-13). Many of the Israelites, during their migration, quickly succumbed to the idolatry they formerly practiced in Egypt (Exodus 32:7-10). As a result of their sin, God prolonged their pilgrimage to the promised land and "made them wander in the wilderness forty years, until the whole generation of those who had done evil in his sight was gone" (Numbers 32:13). Clearly, the apostate Israelites who came out of Egypt were not the people that God desired to bless and bring into "a land flowing with milk and honey" (Joshua 5:6).


The Old Testament contains 166 additional references to "my people" in regard to the God of the Hebrew (Exodus 7:16) descendants of Abraham (i.e., Israel). Superficially, this may provide some credibility for a racist God of the Bible. However, upon further examination, it is evident that God's allegiance to Israel as a nation was conditional (see also Leviticus 26:3-12) and not based on blind favoritism:

For when I [the Lord Almighty, the God of Israel] brought your ancestors out of Egypt and spoke to them, I did not just give them commands about burnt offerings and sacrifices, but I gave them this command: Obey me, and I will be your God and you will be my people. The Lord to the prophet Jeremiah in Jeremiah 7:21-23 (circa 627-586 BC)

Jesus stated that the entire Law and Prophets are contingent upon just two commandments, namely, to "Love the Lord your God with all your heart and with all your soul and with all your mind... [and] Love your neighbor as yourself" (Matthew 22:37-39). God fulfilled all of his promises to the nation-state of Israel by 971 BC (Joshua 21:43-45, 1 Kings 8:56). Unfortunately, the physical descendants of Abraham, Isaac, and Jacob became apostate and forgot their God, and consequently, the Lord divorced "faithless" Israel due to her adulteries (Jeremiah 3:8) and "put an end to the kingdom of Israel" (Hosea 1:4).


Historically, Israel was conquered  by the Assyrian king Tiglathpileser III in 722 BC. Likewise, the southern kingdom of Judah  was semi-conquered in 701 BC by the Assyrian king Sennacherib, and later completely by king Nebuchadnezzar II in 587 BC. The conquest of Israelite territory by the Assyrians ended the sovereignty of the Hebrew nation-state in the Middle East, allowing God to set the stage (Daniel 2:44) for his new covenant (Jeremiah 31:31, 2 Corinthians 3:6, Hebrews 8:13), and the beginning of his spiritual kingdom that will eventually comprise all nations of the world (Genesis 18:18, Daniel 7:14, Matthew 13:31-32, Revelation 15:4).


Even under the old covenant, God allowed foreigners to emigrate from other nations and become part of the people of Israel (see also Exodus 12:49):

Let no foreigner who is bound to the Lord say, "The Lord will surely exclude me from his people." And foreigners who bind themselves to the Lord to minister to him, to love the name of the Lord... and who hold fast to my covenant-these I will bring to my holy mountain and give them joy in my house of prayer. The Lord to the prophet Isaiah in Isaiah 56:3-7 (circa 740-700 BC)

Jesus and his predecessor, John the Baptist, also substantiated God's all-inclusive and non-discriminatory character (Acts 10:34-35). For example, when many of the Pharisees and Sadducees in Jesus' day proudly asserted their physical descent from Abraham as a guarantee for citizenship in the kingdom of God, John the Baptist reproved them and said, "... out of these stones God can raise up children for Abraham" (Matthew 3:9). Again, when the Jews claimed Abraham as their father, Jesus admonished them and declared, "You [murderous Jews] belong to your father, the devil, and you want to carry out your father's desires" (John 8:39-44). Jesus also castigated "those who say they are Jews [living in Smyrna and Philadelphia] and are not, but are a synagogue of Satan" (Revelation 2:9, 3:9). What is more, Jesus disowned His biological mother and brothers because they did not believe in him at the time (Matthew 12:49-50, John 7:5).


From the beginning, the all-inclusive nature of God was evident when he included "those who are not your offspring" in his covenant with Abraham (Genesis 17:12). Even more, the prophet Isaiah recorded that the people of Israel would be subsidiary to foreign nations:

The Egyptians and Assyrians will worship [the Lord] together. In that day Israel will be the third, along with Egypt and Assyria, a blessing on the earth. The Lord Almighty will bless them, saying, "Blessed be Egypt my people, Assyria my handiwork, and Israel my inheritance." The Lord to the prophet Isaiah in Isaiah 19:23-25 (circa 740-700 BC)

The apostle Paul affirmed the all-inclusive, non-discriminatory nature of God when he expounded the Scriptures:

For not all who are descended from Israel are Israel. Nor because they are his descendants are they all Abraham's children... In other words, it is not the children by physical descent who are God's children, but it is the children of the promise [through Isaac] who are regarded as Abraham's offspring. The apostle Paul to the Romans in Romans 9:6-8 (circa 57 AD)

Even more, Paul, writing to the predominately Gentile church in Colossae of Asia Minor, calls the Colossians "God's chosen people":

Therefore, as God's chosen people, holy and dearly loved, clothe yourselves with compassion, kindness, humility, gentleness and patience. The apostle Paul to the Colossians in Colossians 3:12 (circa 60 AD)

In conclusion, it is clear that the physical nation of Israel was only a temporary and external representation of God's people (Amos 9:8). God inherited (Jeremiah 12:8) the physical descendants of Israel by default as a result of the Lord's loyalty to his covenant with Abraham (Romans 11:28), "the man of faith" (Galatians 3:9). Only individuals who are circumcised in heart (Deuteronomy 30:6, Jeremiah 9:25-26), and adhere to Abraham's faith-model in the Savior (John 8:56), are the true "Israel of God" (Galatians 6:15-16). It was these, spiritual offspring of Abraham, that God promised to make "as numerous as the stars in the sky and as the sand on the seashore" (Genesis 22:17). Furthermore, genuine faith in the Lord Jesus Christ transcends all physical, national, and religious boundaries (Romans 8:38-39), thus rendering any relationship to the "God of Israel" (Exodus 5:1) solely by physical birth profitless (Matthew 8:10-12, John 3:5). The Good Shepherd, Jesus Christ, has henceforth and forever brought all believers from every nation into one flock (John 10:16) to serve and worship together (Galatians 3:28-29).