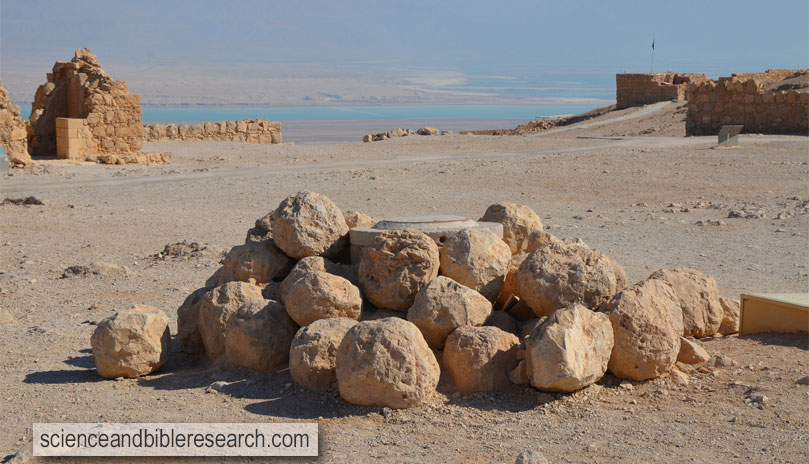 Continuing his advance toward Jerusalem, general Vespasian, on the 29th day of Iyyar (May 30th) in 67 A.D., commands his forces against Jotapata (Lower Galilee), a fortified city with valleys "immensely deep and steep, insomuch that those who would look down would have their sight fail them before it reaches to the bottom."  The Romans prepare 160 siege artillery, with a range of 2 furlongs (440 yards), hurling "stones of the weight of a talent... together with fire, and a vast multitude of arrows..."  (Revelation 16:21) at the walls of the Jewish city. Josephus describes the approaching 100 pound stone projectiles as "white [in] color, and could therefore not only be perceived by the great noise it made, but could be seen also before it came by its brightness."  The following day, the Sun is darkened  at 18:30 (i.e., 6:30 p.m.) over the skies of Jerusalem.


Premillennialists (a.k.a. Doomsday-Rapture theorists) believe that a cataclysmic storm producing actual one-hundred pound hailstones will rain down on unbelievers living on earth during the "great tribulation." To date, the heaviest hailstone ever documented weighs a meager 2.25 pounds.  Should these "great hailstones" (Revelation 16:21) be interpreted literally or symbolically? When interpreting any passage of Scripture, it's important to consider the text before and after the one in question.


In Revelation 16:20 the apostle John tells us that "every island fled away, and no mountains were to be found." This was a result of the seventh angel pouring "out his bowl into the air" (Revelation 16:17). In the next chapter, we read of "the judgment of the great prostitute who is seated on many waters" (Revelation 17:1). Since these events are obviously symbolic (i.e., islands can't physically flee away and prostitutes don't actually sit on many waters), neither should the "great hailstones" be interpreted literally, but symbolically.