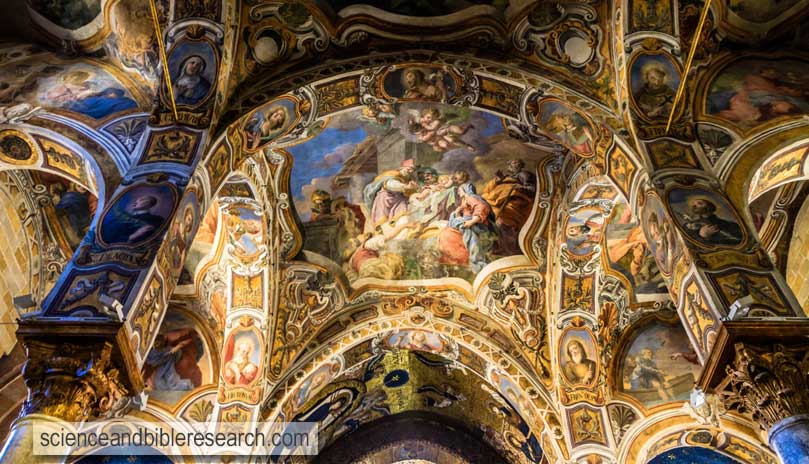 Interior of the famous church Santa Maria dell Ammiraglio on June 26 2013 in Palermo in Sicily, Italy (Photo by AndreasZerndl)

Is Pope Francis trying to establish a one-world religion, as many doomsday bloggers believe? Some even go so far as to call him the false prophet mentioned in the Book of Revelation (Revelation 16:13, 19:20, 20:10). This article will compare Pope Francis' messages to the apostle Paul's teachings in Scripture, and as a result, falsify their allegations. Let us begin.

In this crowd, in this range of religions, there is only one certainty we have for all: we are all children of God. Pope Francis' prayer intentions, January 6, 2016 (time 0:35)

In the aforementioned video address, Pope Francis acknowledges that Buddhists, Jews, Muslims, and Christians all have different beliefs. He reports that they "think differently, feel differently, seeking God or meeting God in different ways." Francis is not making a theological statement here, suggesting that there are many paths to the same God. Instead, he is simply making a sociological observation: "Most of the planet's inhabitants declare themselves believers." Our religious differences should not separate us as members of the same race (i.e., the human race). We should nonetheless come together for the sake of peace and justice. His message is a call for dialogue among people of various religions in the name of love for one's neighbor (Leviticus 19:18, 19:34, Matthew 5:43-44, Romans 13:9), not the promotion of a one-world religion or the combining of various elements thereof. In a restricted sense (i.e., regardless of one another's personal beliefs), we can all view each other as children of God.


Compare Pope Francis' video monologue with Saint Paul's speech to the polytheistic Greeks in the first century AD, where he uses terminology similar to Francis' "we are all children of God" statement to convey the same idea:

From one man he [God] made all the nations, that they should inhabit the whole earth; and he marked out their appointed times in history and the boundaries of their lands. God did this so that they would seek him and perhaps reach out for him and find him, though he is not far from any one of us. 'For in him we live and move and have our being [from the Cretan philosopher Epimenides].' As some of your own poets have said, 'We are his offspring [from the Cilician Stoic philosopher Aratus].' Therefore since we are God's offspring, we should not think that the divine being is like gold or silver or stone - an image made by human design and skill. Saint Paul to the Athenians in Acts 17:26-29 (circa 62-64 AD)

The Greek word Paul uses for offspring is genos, which means kindred, offspring, family, stock, tribe, or nation . Other Greek words in the New Testament used for children are huios (Matthew 5:9) and teknon (Romans 8:16). These can also be translated offspring, but emphasizes the male gender and sonship. The point that Paul is trying to make to his Greek audience is that, since we are all offspring of God, we should not think that the "divine being" can be satisfactorily represented by a gold, silver, or stone idol (Daniel 5:23). He too, is calling for open discussion with people of other religions (i.e., polytheistic Greeks). This begins with a basic understanding that we are all God's offspring, or children.


Contrary to the belief of many doomsday proponents, Pope Francis, like the apostle Paul before him, is not speaking of forming an indistinguishable, one-world religion. Instead, the message is that no matter what we believe, we all have a commonality as human beings that begins with God. Every person, regardless of whether they worship Jesus, Buddha, or Satan, is a creation of God (Genesis 1:27-28, Mark 10:6) and should be approached on those terms. This leads to mutual respect for one another, rather than a holier-than-thou mindset where an individual is unfairly disparaged (1 Peter 2:17). Neither Paul nor Francis use the phrase children of God or offspring of God to signify an automatic, personal relationship with God the Father, since this can only be achieved through Christ Jesus (John 14:6, 1 John 5:20).


Another speech that is taken out of context by doomsday bloggers is Pope Francis' statement about having a personal relationship with Christ while forsaking the assembly of the church:

There are those who believe you can have a personal, direct, and immediate relationship with Jesus Christ outside of the communion and meditation of the church. These temptations are dangerous and harmful... Pope Francis warns against DIY Christianity, June 25, 2014 (time 0:48)

Pope Francis admits that Christians, at times, may have reason to separate themselves from the church when, for example, a brother or sister "makes us face a problem, or scandalizes us." But he reminds us that as believers, Christ has entrusted us with the gospel (1 Thessalonians 2:4), and that our "gifts and limits" (Romans 12:4-8) should be reason enough to fellowship together all the more, rather than drive us apart. He did not say it was impossible to have a personal relationship with the Savior outside the church (Luke 9:49-50), but that it is dangerous and harmful for a Christian to exist apart from a local body of believers. Pope Francis was warning against "do-it-yourself" or "freelance" Christians who think they don't need the fellowship of the church community. I, for one, can testify that fellowshipping with a local body of believers on a regular basis promotes growth and prevents backsliding into former sins. It is interesting to note that Francis did not admonish his audience to join the Roman Catholic Church in particular, but spoke of the church in general terms. The apostle Paul also warned Christians against neglecting the fellowship of believers:

And let us consider how we may spur one another on toward love and good deeds, not giving up meeting together, as some are in the habit of doing, but encouraging one another - and all the more as you see the Day approaching. Unknown author (possibly Saint Paul) in Hebrews 10:24-25 (circa 60-70 AD)

The Pope also speaks explicitly on Jesus Christ and salvation, but these messages are deliberately ignored by the same doomsday bloggers who accuse him of spreading un-Biblical teachings. Below is an example of Pope Francis' addresses which clearly shows that his views are in accord with the apostolic teachings contained in the New Testament:

On this day, Jesus, the Saviour is born of the Virgin Mary... the Son of the Most High, since he "is of the Holy Spirit" (Mt 1:20). He is truly the Saviour, for he is the Lamb of God who takes upon himself the sin of the world (cf. Jn 1:29). With the shepherds, let us bow down before the Lamb, let us worship God's goodness made flesh, and let us allow tears of repentance to fill our eyes and cleanse our hearts. Pope Francis' Christmas address, December 25, 2015  Jesus tells us that there is a gate that allows us to enter into God's family, into the warmth of the house of God, of communion with Him. This gate is Jesus himself (cf. Jn 10:9). He is the gate. He is the gateway to salvation. He leads us to the Father. And the gate that is Jesus is never closed, this gate is never closed, it is always open and open to everyone, without distinction, without exclusions, without privileges. Because, you know, Jesus does not exclude anyone. Pope Francis: Angelus Message on the Gate of Faith, August 27, 2013  We all share the blame [of the resultant separateness in the church throughout history]. We have all sinned. There is only one blameless, the Lord... I am yearning that this separation comes to an end and gives us communion... And together to worship Jesus Christ as the only Lord of history. Pope Francis' Message on Christian Unity to Pentecostal Conference, February 20, 2014 (time 2:55)

We see then, that Pope Francis' statements are in accord with those of Saint Paul in Scripture. Doomsday bloggers' accusations to the contrary are baseless and border on paranoia. When reading the Pope's, or anyone else's speeches, it is important to read the entire message as well as consider the context and correctly differentiate between what is implicit (i.e., implied though not plainly expressed) and explicit (i.e., stated clearly and in detail, leaving no room for confusion or doubt). This will prevent any wild and unwarranted interpretations.