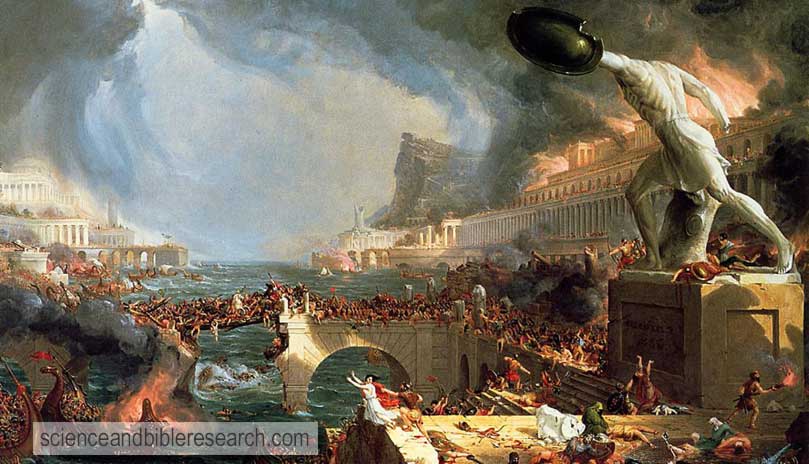 The Course of Empire Destruction (Art work by Thomas Cole)

After being declared an enemy by the senate, emperor Nero, fearing the due punishment of ancient Roman customs (which consisted of stripping the criminal naked and whipping him to death while his neck was secured within a forked stake), plunges a dagger into his neck . Caesar Nero, whose household the apostle Paul described as "saints" (Philippians 4:22), persecuted the Christians for about 42 months from 64 to 68 AD (Revelation 13:5-7) and fulfills the prophecy of the Beast with two horns. His suicide effectively ends the Julio-Claudian dynasty that ruled from the Empire's founding . As a result his death, Rome, the kingdom of the Beast (Revelation 13:1-4), is "plunged into darkness" as the fifth angle pours out his bowl of God's wrath (Revelation 16:10). For the next year, Rome experiences "a period rich in disasters, frightened in its wars, torn by civil strife, and even in peace full of horrors... prodigies in heaven and earth, the warning voices of the thunder, and other intimations of the future, auspicious or gloomy, doubtful or not to be mistaken"  (Revelation 16:10-11). Nero's suicide was preceded a month earlier by a total lunar eclipse on May 5, 68 AD at 11:00 pm . Emperor Nero's successor, Titus Flavius Vespasianus (9-79 AD), revives the Empire from its "mortal wound" (Revelation 13:3) in 69 AD when he becomes the founder of the Flavian dynasty.