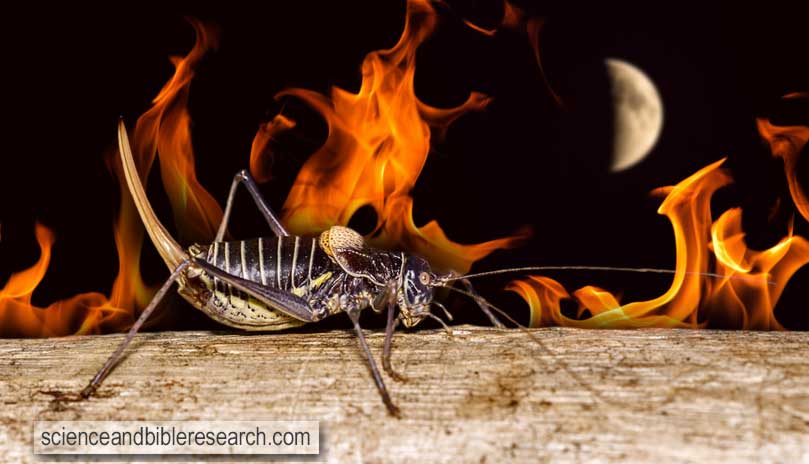 Insect and moon at night (Photo by Bloack)

Roman armies surround Jerusalem (Luke 21:20) and imprison Jewish rebel fighters and non-combatants within its walls. With almost all of the city's corn reserves burnt by the warring Jewish factions  and no way to escape, severe famine and pestilence (Luke 21:11, Revelation 6:8) overtakes the Jews until the five-month long siege ends with the destruction of the city and its 3rd (Herod's) temple (Luke 21:6).


This event brings to pass the apostle John's vision of locusts which "looked like horses prepared for battle... horses rushing into battle" (Revelation 9:7-9, see also Jeremiah 51:27, Judges 6:5, 7:12). Similarly, the Lord describes locusts as "my great army" that he prophesied to send against rebellious Jerusalem (Joel 2:25) on the "day of the Lord" (Joel 2:1, 2:11, 2:31). The prophet Jeremiah uses locusts to describe an enormous invasion of troops that will "shout in triumph over you [Babylon]" (Jeremiah 51:14).


These commanders and their armies came from various regions of the Roman Empire-governed world  including Egypt, Cesarea, Syria, Arabia, Macedonia, Italy, in addition to troops that guarded the great Euphrates river  (Revelation 9:14). A conservative estimate of the entire army numbered about 70,000 fighters (Revelation 9:16). The death toll that followed the Roman-Jewish war (66-70 AD) equaled one-third of the 3 million (Revelation 9:15) that did not flee like Jesus instructed (Luke 21:21-22) and were imprisoned by the Roman armies at the beginning of the conflict which began on April 27, 66 AD.


Jewish historian, Josephus, documented the dire condition of Jewish residents who remained inside the city. For example, he describes people cutting off their arms and legs in order to prevent infections from spreading throughout their body.  He also states their hunger was so unbearable, that people gnawed on shoes and belts and ate things "the most sordid animals would not touch."  Still, one of the more gruesome atrocities involved a wealthy Jewish woman who "slew her son, and then roasted him, and eat[sic] the one half of him, and kept the other half by her concealed."