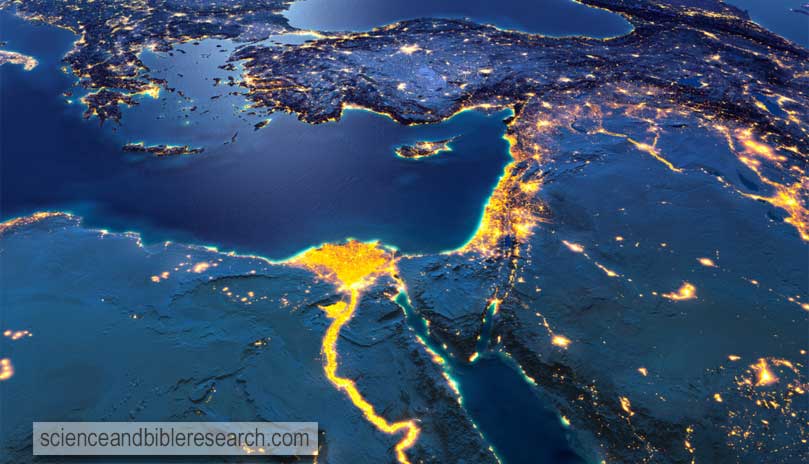 Earth with precise detailed relief and city lights illuminated by moonlight. Africa and Middle East. Elements of this image furnished by NASA (Photo by Antartis)

Judgment is executed against the Phoenician  city-states of Tyre and Sidon (Matthew 11:21-22), and the regions of Philistia  (Joshua 13:3 and 1 Samuel 6:17) by the armies of Alexander the Great.  This was decreed by God through the prophet Joel centuries earlier (Joel 3:4) and fulfilled in August 332 BC.


Both Jewish and Christian Zionists presumed that the meeting of 70 nations in Paris on January 15, 2017 was an attempt to force modern Israel to accept a two-state solution.  Adam Eliyahu Berkowitz, writing for Breaking Israel News, falsely professed that "By so doing, they will be fulfilling a momentous Biblical prophecy foretold thousands of years ago."  However, just like all of their erroneous predictions and false expectations, the 70-nation peace conference "failed to accomplish anything significant against Israel"  and did not result in a resolution forcing the Jewish State to divide the land. The "momentous Biblical prophecy" that was supposed, by Zionists, to be fulfilled at the peace conference was written in the Old Testament book of Joel:

I will gather all the nations and bring them down to the Valley of Jehoshaphat. And I will enter into judgment with them there, on behalf of my people and my heritage Israel, because they have scattered them among the nations and have divided up my land. Joel, the son of Pethuel, to the elders and inhabitants of Judah in Joel 3:2 (circa ninth to sixth century BC)


Since Joel was writing sometime between the ninth and sixth century BC, he would have been prophesying before or during the Jewish captivity in Babylon, which began circa 597 BC  and ended in 538 BC with the decree of King Cyrus. Therefore, the fortunes, or captivity, that God was going to restore (Joel 3:1) was that taken in the Babylonian exile. The timeframe and context of the passage do not refer to the creation of the modern, secular state of Israel in 1948 as Zionists and Premillennialists presume.


In the prophecy, the prophet foretells of God judging the nations that "scattered them [my people and my heritage Israel] among the nations and have divided up my land." But the prophecy specifically refers to the cities of "Tyre and Sidon, and all the regions of Philistia" (Joel 3:4), not the 70 nations that met in Paris. Furthermore, the prophecy speaks of God judging those nations, not solely for dividing the land, but for the wickedness perpetrated against its residents. For example, it was because they "cast lots for my people, and have traded a boy for a prostitute, and have sold a girl for wine... For you have taken my silver and my gold, and have carried my rich treasures into your temples. You have sold the people of Judah and Jerusalem to the Greeks in order to remove them far from their own border" (Joel 3:3, 3:5-6).


King Nebuchadnezzar carried away captive the prominent citizens of Judah into Babylon, while the poor of the land were allowed to remain in Jerusalem (2 Kings 24:14). Tyre, Sidon, and the regions of Philistia did not take part in the deportation of Jews into Babylon. Hiram, king of Tyre, "always loved David" (1 Kings 5:1) and even helped King Solomon build the first temple for the Lord by supplying him with timber (1 Kings 5:7-8). However, after Jerusalem was conquered by the besieging Babylonians, all of her friends became enemies (Lamentations 1:2). Apparently, they exploited the poor of the land who struggled to survive in the desolate and despised city (Lamentations 1:8-11).


The prophecy also mentions that the sons and daughters of Tyre, Sidon, and Philistia, will be sold "to the Sabeans, to a nation far away" (Joel 3:8). The Sabeans (Job 1:15, Isaiah 45:14) were the people of the nation of Sheba who were eventually conquered by the Himyarite Kingdom sometime between 100 and 120 AD.


This was not the first time that Doomsday-Rapture Zionists erroneously predicted the fulfillment of Joel 3:2.  In 1993, they believed that the Oslo Peace Accords , which required Israel to give up land to Palestinian Arabs, would fulfill Joel's prophecy. In fact, the recent death of 9th Israeli President Shimon Peres  was completely ignored by popular Doomsday-Rapture Zionists John Hagee, David Jeremiah, Franklin Graham, et al. because of his involvement in dividing the land of Israel.


Furthermore, the land of Israel was already divided in the 10th-century BC into Northern and Southern Kingdoms. Both kingdoms were later conquered by foreign powers. Israel would become a nation again after their return from Babylonian exile in 538 BC. Israel was again divided during the Syrian invasion in the 2nd-century BC and finally by the Romans in the 1st-century AD when the land of Israel was renamed Palaestina  and Jerusalem was called Aelia Capitolina.


At the time of his death nine years later in June 323 BC, Alexander the Great conquered and Hellenized the Persian Empire and expanded the Greek kingdom of Macedonia's dominion all the way to the Nile and Indus rivers.  This historic event fulfilled another prophecy given to Daniel concerning "a third kingdom of bronze, which shall rule over all the earth" (Daniel 2:39, Cf Daniel 7:6, 8:5, 8:21, 11:4).