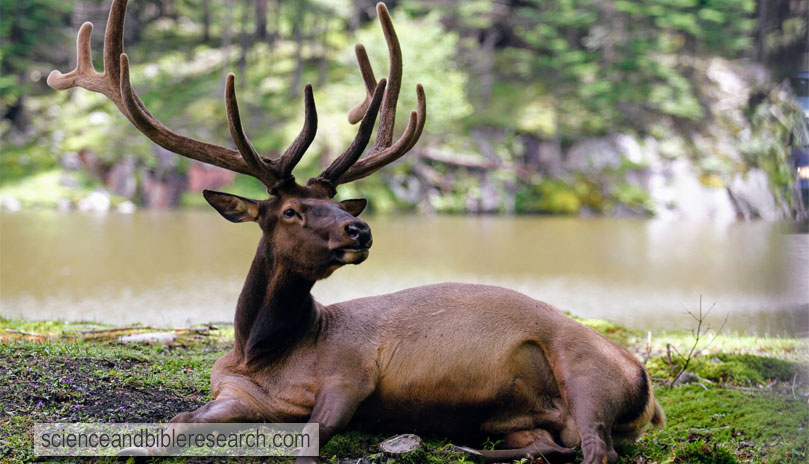 Deer relaxing by the river (Photo by ML@cragaar)

Can there be a good purpose for animal death? Since God has put eternity in our hearts (Ecc 3:11), it can be difficult to imagine the process of dying (e.g., aging, disease) and death as something good. This article will show that animal death existed for a good purpose before sin entered the world. This doesn't violate God's goodness in creation.

Moses tells us that God declared everything that he made "very good" (Gen 1:31). This phrase, "very good", in the Hebrew (mᵊ'ōḏ and ṭôḇ) means "exceedingly, much" and "good, pleasant, agreeable" respectively. We can conclude then that God created everything, at the most, exceedingly good. This is still less than perfect.


This may be simple enough, but Young-Earth Creationists (YEC) interpret Genesis 1:31 to mean "perfect." Bodie Hodge (Answers in Genesis) states that "He [God] declared everything "very good" - it was perfect. God's work of creation is perfect" (source). However, there is a different Hebrew word for "perfect" found in the Tanakh. For example, Moses uses the Hebrew tāmîm for "perfect" which means "complete, whole, entire, sound" in reference to making an animal sacrifice for a peace offering (Lev 22:21). If Moses wanted us to believe that God created everything perfect, then he would have written tāmîm in Genesis 1:31, instead of mᵊ'ōḏ ṭôḇ.


Furthermore, the apostle Paul tells us that God subjected his creation to futility. This "futility" apparently had nothing to do with Adam's sin but with God's design; "...because of him [God] who subjected it..." (Rom 8:20). The curses of Genesis only pertained to the serpent (Gen 3:14) and the ground (Gen 3:17), not the entire universe as YEC's argue (source). Paul does not even mention the curses of Genesis or Adam's sin in Romans 8. Hence, this is consistent with Moses' view that God created everything "very good", not perfect. Paul goes on to reveal the reason why God initially created the world with a "bondage to corruption"; that he might one day set it free (Rom 8:21). This freedom from corruption will be realized when our physical bodies are redeemed (Rom 8:23) and in the new heaven and new earth (Rev 21:4).

From the beginning, the death of humans is connected to the sin of Adam. This is evident where God warns Adam and Eve not to eat of the forbidden tree, lest they die (Gen 2:17, 3:3). Notice that God limits his admonition to Adam and Eve and doesn't include Adam's former companions; the animals which he named in Eden (Gen 2:18-20).


The apostle Paul teaches us that death entered the world through Adam's sin:

Therefore, just as sin came into the world through one man, and death through sin, and so death spread to all men because all sinned... The apostle Paul to the Romans in Romans 5:12 (circa 57 AD)


Notice that Paul explicitly states that death spread to all anthropoi. This is the Greek term for both men and women. The reason death spread from Adam to all of humanity is because "all sinned." Animals cannot sin. So animals could not be in view here. Just five verses later, Paul again uses the same Greek term for men and women (anthropoi) in reference to the condemnation brought about through the sin of Adam, and the justification and life available in Christ Jesus:

Therefore, as one trespass led to condemnation for all men, so one act of righteousness leads to justification and life for all men. The apostle Paul to the Romans in Romans 5:18 (circa 57 AD)


Here, we must turn to the book of nature: the fossil record. YEC contend that dinosaurs and humans lived and died at the same time during Noah's Flood. Therefore, we should find human remains within the same geological layers where dinosaurs and other animals are found. But since these layers are devoid of any human fossils or their cultural artifacts, it is entirely reasonable to conclude that animal death must have existed before Adam and Eve were even created, let alone before they sinned.

Now that we have established that animal death occurred before the Fall, we shall see how good and essential animal death is to the environment in which we live.


In a study conducted in a Dutch nature reserve, scientists found that red deer carcasses "directly benefit many carrion-eating insects like flies or carrion beetles, they also have a positive long-term effect on plant growth." The researchers already foresaw a benefit for insects. However, they did not expect a benefit to plant life, which "grew more than five times larger near the carcasses than in other locations..." The results of the study were so impressive, that researchers are now petitioning the government to amend its regulations and allow the carcasses of large animals to remain on the nature reserve (source).


Animal overpopulation is another problem with the YEC argument against animal death. If animals were designed to live forever after creation, then they would undoubtedly end up consuming all of the vegetation (Gen 1:30) and eventually die from mass starvation.


This was exactly the case in the rewilding of a vast marshland east of Amsterdam. Ecologists allowed large herbivores (deers, horses, cattle) to repopulate the marshland unchecked, causing trees to die and a subsequent decline in wild bird populations. Naturally, the herbivores themselves multiplied to the extent where the marshland could no longer sustain their growing numbers. About 90% of the animals had to be shot by forest rangers before they could die in agony of starvation (source).


YEC proponents may argue that the ecology of the earth changed after the Fall, and this is why we observe the benefits of animal death as described above. If this is true, then God would have had to create animals and their environment with the ability to successfully handle death in a life-giving manner (Jhn 12:24).