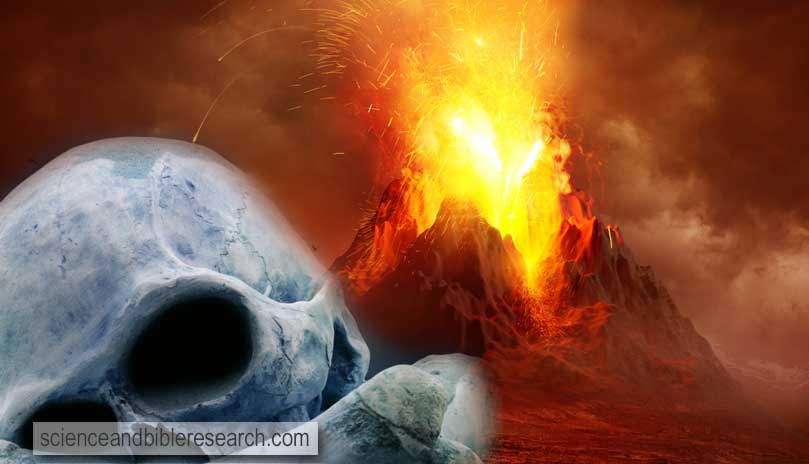 The Lord strikes back against the Roman Empire nine years, almost to the day, after they destroyed Jerusalem and its 3rd (Herod's) temple (Zechariah 14:1-4). Although the Lord had allowed the Romans to conquer the apostate Jewish city and their temple for rejecting and crucifying his Son, the Lord Jesus Christ (Luke 19:41-44), the Romans did not repent of their own idolatry, even after Roman General Titus testified of God's power in bringing about Jerusalem's desolation.  The Lord punished Babylon for similar reasons after king Nebuchadnezzar destroyed the first (Solomon's) temple in 586 BC (Jeremiah 25:11-12, 50:17-18).


Not all natural disasters are the result of God's judgment. Only those directly associated with Bible prophecy concerning ancient Jerusalem and its temple, the last of which were destroyed in 70 AD. This is because the people involved in the destruction of apostate Jerusalem and the crucifixion of Christ and the persecution of his apostles are no longer alive. Natural disasters occur normally as a result of the earth's instability brought about by the cataclysm of Noah's Flood. The eruption of Mount Vesuvius in 79 AD may have been a result of this and not God's judgment. If so, then the prophecy of Zechariah 14 would have been fulfilled at the time of the Maccabean Revolt. Furthermore, God's judgment included the life or reign of the kings themselves, and not necessarily that of the entire empire or kingdom. For example, king Nebuchadnezzar lost power in 556 BC, 30 years after he destroyed Jerusalem and its first (Solomon's) temple. Meanwhile, emperor Titus lived a mere 11 years after he destroyed Jerusalem and its third (Herod's) temple in 70 AD. Titus only ruled over the Roman Empire for a short 2 years (79-81 AD), compared to Nebuchadnezzar's 43-year reign over the Babylonian Empire (605-562 BC).


After Jerusalem's destruction, Titus was reported to have "conducted himself with great haughtiness and violence... incurred the hatred of the people."  The extent of his cruelty caused the citizens of the empire to believe he would become "another Nero."  However, his reputation greatly improved after he became emperor and was said to be "by nature extremely benevolent"  to the Roman public. In the same year in which Mount Vesuvius erupted, Titus promoted imperial cult worship and began constructing a temple in between the temple of Concordia and the temple of Saturn to honor his deified father, former emperor Vespasian.


Consequently, shortly after Titus succeeded his deceased father Vespasian as emperor of the Roman Empire (79-81 AD), on the afternoon of August 24 in 79 AD, Mount Vesuvius  exploded, and forever "changed the face of the country."  The volcanic eruption caused an enormous column of pumice and ash to ascend 30 kilometers into the atmosphere. An estimated 2.6 cubic kilometers of rock was hurled into the sky and blanketed the neighboring cities of Pompeii and Herculaneum in a cloud of darkness. Soon afterward, "a dense, rolling, ground-hugging mass of [lethal] gas, ash and rock (the pyroclastic flow)... where temperatures reached anything from 400 to 800 °C... killed those it struck instantly, as brains boiled and skulls exploded in the flash."  Skeletal remains of individuals who lived in Herculaneum reveal that "death was instantaneous... [and that their bodies were] burnt to the bone in seconds."  The Old Testament prophet, Zechariah (520-518 BC), foretold of an eerily similar event, when he said that "Their [the people that fought against Jerusalem] flesh will rot while they are still standing on their feet, their eyes will rot in their sockets, and their tongues will rot in their mouths" (Zechariah 14:12).


Pliny the Younger, a lawyer, author, and magistrate of Ancient Rome, witnessed the events and provided a detailed description. He reported that the "sea seemed to roll back upon itself, and to be driven from its banks by the convulsive motion of the earth [that was] so particularly violent that night that it not only shook but actually overturned, as it would seem, everything about us."  Pliny soon found himself in the midst of a "panic-stricken crowd"  who "fled with the utmost terror."  (Zechariah 14:13). Residents were running from "a black and dreadful cloud, broken with rapid, zigzag flashes, revealed behind it variously shaped masses of flame... [that] seemed to be following us, spreading itself over the country."  Roman historian, Dio Cassius, reported that "the amount of dust, taken all together, was so great that some of it reached Africa and Syria and Egypt, and it also reached Rome, filling the air overhead and darkening the sun."


Roman historian, Gaius Suetonius Tranquillus, wrote that "many great disasters" occurred during the barely, three-year reign of Titus. For example, in addition to the eruption of Vesuvius, a disastrous fire that burned for three days and three nights consumed a large portion of Rome, "besides a plague, such as was scarcely ever known before."  Most notably, the inferno demolished the temples of the gods Serapis, Isis, Neptune, and Jupiter. In this way, the Lord executed his divine judgment on the gods of the Romans just like he did to the gods of the Egyptians during the Exodus of the Hebrews (Exodus 12:12). Before Titus destroyed Herod's temple in 70 AD and before the fire that destroyed the Temple of Jupiter, Jews from all over the world made a Half-Shekel contribution to the temple in Jerusalem. However, after its destruction, Titus required the Jewish tax to be payed to the Temple of Jupiter in Rome instead.  Even after the disaster caused by the eruption, fire, and plague, Titus did not revere God. Shortly before his untimely death at the age of 41, emperor Titus began the construction of a new temple of Jupiter Optimus Maximus to replace the one that burned down.