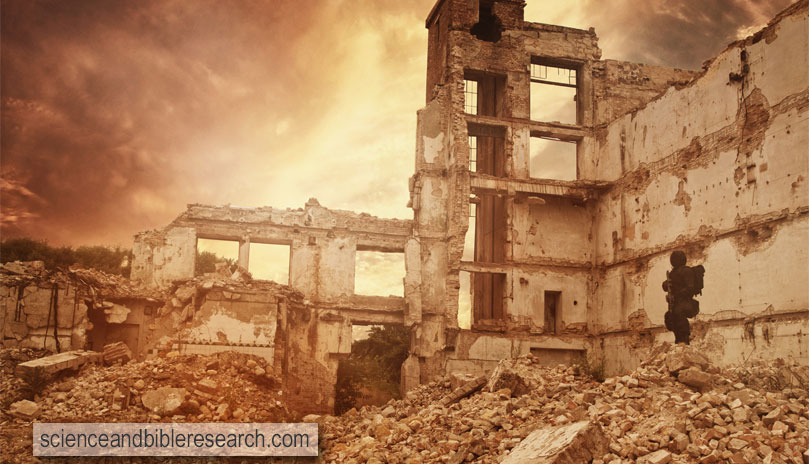 Damascus becomes a heap of ruins

After a failed attack on Jerusalem by the kings of Syria and Israel, King Ahaz of Jerusalem bribes King Tiglath-Pileser III of Assyria (745–727 BC) to rescue him from the Syro-Israeli Alliance. The Assyrian king accepts the offer and responds by transforming Syria's capital city of Damascus into a heap of ruins. The destruction of both Damascus and her Israeli ally (Ephraim) were foretold approximately eight years earlier by the prophet Isaiah (see also Amos 1:5):

A prophecy against Damascus: "See, Damascus will no longer be a city but will become a heap of ruins... The fortified city will disappear from Ephraim, and royal power from Damascus."

The historical account of the city's demise is documented in 2 Kings 16 as well as secular texts. The Bible records that before its destruction, King Rezin of Damascus allied himself with King Pekah of the Northern Kingdom of Israel in an effort to overthrow the Southern Kingdom of Judah (2 Kings 15:37), whose capital city was Jerusalem, "but they could not overpower him [King Ahaz of Jerusalem]" (2 Kings 16:5, Isaiah 7:1). Desperate to pre-empt a future attack from the aggressive Syro-Israeli Alliance, King Ahaz (744-728 BC) entreated King Tiglath-Pileser III of Assyria (745-727 BC) and "took the silver and gold found in the temple of the Lord and in the treasuries of the royal palace and sent it as a gift to the king of Assyria" (2 Kings 16:8). The Assyrian king dutifully complied by "attacking Damascus and capturing it. He deported its inhabitants to Kir and put Rezin to death" (2 Kings 16:9, Cf. Amos 1:5). King Tiglath-Pileser III recorded the conquest in his annals:


...of Rezin (Ra-hi-a-ni) of Damascus... heavy spoil... his advisor... the blood of his warriors, the river... furious, I [King Tiglath-Pileser III] dyed like a red flower... his courtiers, charioteers and... their weapons, I destroyed, and... their horses... I captured his fighters, archers, and shield and lance bearers and I dispersed their battle. In order to save his life, he (i.e., Rezin) fled alone and entered the gate of his city like a mongoose. I impaled his foremost men (i.e., his officials) alive on stakes and made his land watch. For 45 days I set up my camp around his city and enclosed him like a caged bird. I cut down his gardens... countless orchards. I did not leave one standing. I besieged and captured the ancestral home of Rezin of Damascus and the place of his birth. I took 800 people together with their property, their cattle, and their sheep as spoil. I took 750 captives of the cities of Kurussa and Sama as well as 550 captives from the city of Metuna as spoil. I destroyed 591 cities from 16 districts of Damascus like ruins from the Flood. King Tiglath-Pileser III of Assyria in Annals 23:1-17 (circa 732 BC), alternate source


Despite the historical evidence, Pre-Tribulation Rapture theorists still argue that the city of Damascus will be destroyed, along with the 1.7 million people living there. Amir Tsarfati, of Behold Israel, in a February 18, 2021 video called, Amir Tsarfati: Middle East Update Woe to Damascus!, predicts that Iran will smuggle some kind of weapon into Damascus, saying, "Trust me, I can tell you folks. Damascus will cease from being a city. It will be a ruinous heap" (time 35:40).


The prophecy of the destruction of Damascus also involved the sign of a "virgin shall conceive and bear a son, and shall call his name Immanuel" (Isaiah 7:14). The Lord said Damascus would be deserted "before the boy knows how to refuse the evil and choose the good" (Isaiah 7:16). Matthew 1:23 speaks of a dual fulfillment of the virgin birth that was fulfilled in the birth of Jesus Christ, but he makes no mention of another destruction of Damascus. Otherwise, Damascus should have been destroyed while Jesus was still a toddler, since it is at this tender age when babies understand fairness.


The prophet Isaiah again time stamped the destruction of Damascus to occur before his son grew old enough to know how to say, "'My father' or 'My mother'" (Isaiah 8:3-4). This usually occurs by the time a child is two years of age. Thus, the legendary, paradisiacal city disappears from the historical landscape for 200 years in fulfillment of Isaiah's prophecy. Damascus was later rebuilt, but the city's capital status was replaced by her northerly neighbor, Antioch, during Seleucid rule (312-63 BC). Syria's co-conspirator against Jerusalem, the Northern Kingdom of Israel (Ephraim/Samaria), would also fall to the Assyrians 10 years later in 722 BC.