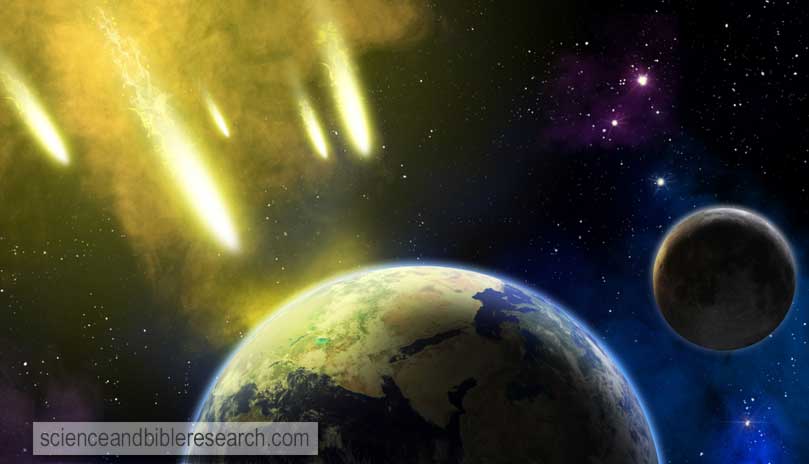 Is the cosmic chaos associated with God's judgment in Bible prophecy designed to be interpreted in a literal manner? Or, is it simply an imaginative means of demonstrating God's power?

Immediately after the distress of those days 'the sun will be darkened, and the moon will not give its light; the stars will fall from the sky, and the heavenly bodies will be shaken.'

See, the day of the Lord is coming - a cruel day, with wrath and fierce anger - to make the land desolate and destroy the sinners within it. The stars of heaven and their constellations will not show their light. The rising sun will be darkened and the moon will not give its light. A prophecy against Babylon in Isaiah 13:9-10 (circa 740-680 BC)

It is possible for the light of the stars and their constellations to be hidden from an earth-based observer due to cloud cover, and it is believable for the sun and moon to be darkened and withhold their light from the earth during an eclipse. In fact, successive Blood Moons (i.e., Total Lunar Eclipses) even appeared in the skies above Jerusalem during the Passover and Sukkot feasts just two years before the beginning of the Roman-Jewish war, which ended with the destruction of Jerusalem and its third (Herod's) temple in 70 AD. Nonetheless, the aforementioned natural phenomena occur with such frequency that it would hardly cause anyone to suspect divine judgment as their origin. A more plausible explanation for the heavenly disturbance is that it was used as a metaphorical demonstration of God's power over objects of worship by the Babylonians and the surrounding pagan nations. For example, the principle images worshiped during the reign of King Nebuchadnezzar of Babylon were the Sun, Moon, and the five planets, Saturn, Jupiter, Mars, Mercury, and Venus.  Idol worship was in direct opposition to God's first commandment (Exodus 20:2-5, Deuteronomy 4:19, Mark 12:29-30, Romans 1:25). History records the fulfillment of Isaiah's prophetic judgment of the Babylonian Kingdom when it was conquered by Cyrus, King of Persia in 539 BC.  Cyrus was the Lord's anointed (Isaiah 44:28, 45:1, Daniel 9:25) who facilitated the Jewish return to their ancient homeland from Babylonian exile in order to rebuild Jerusalem and construct a new temple (Ezra 6:14).


Later, in Isaiah's prophecy against Edom, we read about an even greater disturbance in the cosmos:

All the stars in the sky will be dissolved and the heavens rolled up like a scroll; all the starry host will fall like withered leaves from the vine, like shriveled figs from the fig tree. A prophecy against Edom in Isaiah 34:4 (circa 740-680 BC)

Edom was the name given to Esau, who gave up his birthright to his younger brother Jacob (Genesis 25:29-34). Fertility gods were the principle idols of the Edomites.  In addition, Josephus reports that their national deity was Koze, the Storm/Moon-god.  History records the conquest of Edom sometime in the middle of the sixth-century BC by King Nabonidus of Babylon.  Furthermore, the book of Malachi, written about 100 years later, conveys the fulfillment of Edom's desolation:

Was not Esau Jacob's brother? declares the Lord. Yet I have loved Jacob, but Esau I have hated, and I have turned his hill country into a wasteland and left his inheritance to the desert jackals. The word of the Lord to Israel in Malachi 1:3 (circa 500 BC)

As the prophet Malachi recorded above, the Lord testifies to the fulfillment of the judgment that he initially foretold through his prophet Isaiah (Isaiah 34:13). It is interesting to note that the Lord altogether omits any mention of the collateral damage to the "starry host" that was included in the same prophecy (Isaiah 34:4). This further shows that God never intended to afflict the heavenly objects that he created by his own power (Isaiah 40:26).


The apostle John, the final inspired author of the Bible, perpetuates the tradition of the Old Testament prophets' use of heavenly chaos in God's judgment on apostate Jerusalem:

The sun turned black like sackcloth made of goat hair, the whole moon turned blood red, and the stars in the sky fell to earth, as figs drop from a fig tree when shaken by a strong wind. The heavens receded like a scroll being rolled up, and every mountain and island was removed from its place. The apostle John in Revelation 6:12-14 (circa late-60's AD)

Jerusalem and its Jewish inhabitants have a long history of turning away from the true God and worshiping the gods of their pagan neighbors, which like the Babylonians and Edomites before them, included the "starry hosts" (Exodus 32:3-4, 2 Kings 17:16, Amos 5:26, Jeremiah 8:2, 19:13, Ezekiel 8:5-16, Zephaniah 1:5). Jews living in Jesus' day who proclaimed to know God, yet sought to murder his only Son, were pronounced as belonging to their "father, the devil," by the Lord and Savior (John 8:44). Christ-rejecting Jews alive prior to their temple's destruction and the desolation of Jerusalem were called the "synagogue of Satan" (Revelation 2:9, 3:9). Even more, archeological evidence unearthed afterward in Israel dating from the fourth-century AD reveals the worship of pagan deities, including "Helios, the Greek sun god, riding his four-horse chariot (quadriga) right there in the middle of the zodiac... featured in the center of the floor right behind a mosaic of the Torah ark that was flanked by two large menorahs."  A pantheon of foreign gods, such as Medusa, naked cupids, Leda and the Swan , were also found in the Jewish synagogues of Tiberias, the Dead Sea, Sepphoris, Chorazin, Capernaum, and the Jewish catacombs at Beth Shearim.


If a literal interpretation of Isaiah and John's apocalyptic prophecies were adopted, unimaginable cosmic upheaval would be the result (the smallest known star in the universe is similar in diameter to Jupiter ). In effect, this should have rendered the entire globe uninhabitable three times within the span of about 620 years (i.e., from the destruction of Babylon and Edom circa 550 BC to the destruction of Jerusalem in 70 AD). The differentiation between literal and metaphoric literature in Scripture was clearly understood by the ancient Rabbis. They were asked that if idolatry was so objectionable, why did God not destroy the heavenly objects that were adored and worshiped by unbelievers. Their shrewd response was that "God can not destroy the world on account of the heathen."  Hence, from the historical and ancient Near Eastern, cultural context of these and other apocalyptic passages, the cosmic judgment language was clearly metaphoric in genre. The purpose of this graphic, prophetic literary style was to demonstrate God's omnipotence over his creation, a concept that was offensive and strange to cultures that worshiped the heavenly bodies, rather than the Creator. God created the earth to be inhabited (Isaiah 45:18); he did not create it to destroy the wicked along with the righteous on account of idolaters (Genesis 18:23-25).