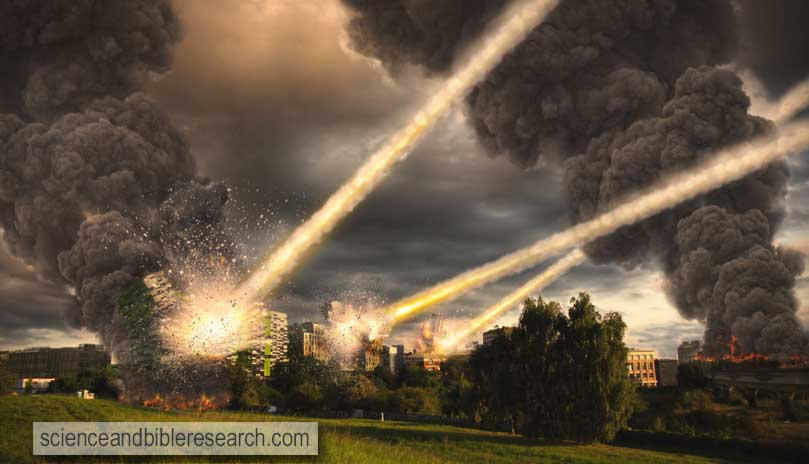 Meteorite shower over a city (Photo by sdecoret)

Is God going to judge America because of un-Biblical laws that are enacted by the Supreme Court?


Just a year ago on June 26, 2015, the Supreme Court decided to legalize same-sex marriage across the United States . Several prominent preachers claimed that this was an affront to God and would bring punishment on America.


Since the nation's highest court ruled, several tragedies have taken place: (1) the San Bernardino shooting on 12/2/15 , (2) the death of U.S. Supreme Court Justice Antonin Scalia on 2/13/16 , one of the four justices who ruled against legalization of same-sex marriage, (3) the massacre at the Orlando gay night club  on 6/12/16.


See how these outspoken Christian preachers unfortunately promote a false and carnal understanding of the God and Father of the Lord and Savior, Jesus Christ.


Several prominent Christian writers have opined on the issue in regard to the nation-wide legalization of same-sex marriage last summer . For example, John MacArthur calls the Supreme Court legalization of abortion and same-sex marriage "The two greatest attacks of terror on America."  In the following article, we will examine the statements of several of the more outspoken individuals in light of Scripture. In so doing, we shall see that God will not judge or punish America on account of unholy laws passed by the nation's highest court. Rather, in his bountiful mercy, he desires and patiently awaits the maturation of its populace toward righteousness.

We as a nation, our politicians, are turning our backs on God. And we, as a nation, will pay for this. I believe God will judge this nation for our refusal to obey his word. Franklin Graham (March 25, 2014)

Graham made the statement above three months ahead of the Supreme Court's decision on same-sex marriage. He falsely asserts that God will judge America based on the actions of a few (i.e., “our politicians”). He combines the decision of the five out of nine justices who would, in the months ahead, rule in favor of same-sex marriage with the inaction of a large portion of the population that had no power or voice in the decision. Since God is a holy Judge (Psalm 68:5, Revelation 6:10), he does not condemn the innocent with the guilty (Genesis 18:25-26, Ezekiel 18:20-21).


Although a majority of Americans (55%), according to a recent poll , do support same-sex marriage, there is still a significant minority that opposes it (39%). Among the religious, an average 70% of Protestants oppose same-sex marriage.


The statistics above force an important question: What is the will of God (Mark 3:35)? Aligning a nation's laws to that of the legalistic and obsolete Old Testament standard (Hebrews 8:13)? Or, the gathering of individuals into the one Body of Christ by faith in the Savior? Obviously, a holy and perfect Creator-God is far more desirous of bestowing the perfect and righteous work of his Son Jesus Christ on an unbeliever (Mark 2:17, John 6:29). Recent statistics  reveal that 30% of US adults are self-described born-again or evangelical Protestants. In addition, 22% of Catholics, 18% of Orthodox Christians, 23% of Mormons and 24% of Jehovah's Witnesses also consider themselves born-again or evangelical Christians. This constitutes a large portion of the United States (at least 90 million Americans).


Also, God never judged any nation in the Old Testament as a result of politicians turning their backs on God as Graham states. Rather, judgment was apportioned due to the overwhelming majority of the inhabitant's immoral practices. This is evident in the account of ancient Jerusalem during the first temple period (circa 967-586 BC):

Go up and down the streets of Jerusalem, look around and consider, search through her squares. If you [Jeremiah] can find but one person who deals honestly and seeks the truth, I [the Lord] will forgive this city. The Lord to Jeremiah in Jeremiah 5:1 (circa 627-586 BC)

With 39% of the population in opposition to same-sex marriage, it is difficult to believe how, as Graham asserts, that America is anywhere near the level of immorality of 6th-century BC apostate Jerusalem, where not even one honest person could be found within its borders.


The Bible also reveals that even if the people of a nation are engaged in immoral behavior, God will pardon their sin if they repent:

When God saw what they [the Ninevites] did and how they turned from their evil ways, He relented and did not bring on them the destruction He had threatened. The prophet Jonah in Jonah 3:10 (circa 793-753 BC)


Another example of the Lord's punishment-turned-to-mercy is evident when king Jehoahaz of Judah incurred judgment by doing "evil in the sight of the Lord" (2 Kings 13:2). The Lord allowed the Syrians to oppress the Israelites, however, when the same evil king prays to the Lord for mercy, the Lord graciously responds by giving Israel a savior by whom they escape oppression (2 Kings 13:4-5). Interestingly, in a seemingly uncharacteristic departure from his modus operandi, God responds in mercy even though the Israelites did not repent of their sins after the Lord granted the king's request and gave them reprieve (2 Kings 13:6).

In his statement, Hagee attempts to put God between a rock and a hard place (i.e, judge America or apologize to Sodom and Gomorrah). The statement also implies that God acted unjustly when he destroyed Sodom and Gomorrah. In his comparison, Hagee falsely asserts that America is somehow the “new Sodom and Gomorrah” simply because of a Supreme Court decision that allows same-sex marriage. This is fallacious reasoning since there is no evidence to suggest that a nation's laws promote the transformation of straight individuals toward gayness. Laws like this just make it safer for gays and lesbians to "come out of the closet" so to speak. Openness about one's sexual disposition is a good thing because it can facilitate honest discussions about the righteousness that can only be attained by faith in Christ.


Sodom and Gomorrah does not compare to America in its immorality. According to statistics, gays and lesbians make up a mere 3.8% of the US adult population . Sodom and Gomorrah only contained four righteous people (Genesis 13:13, 19:16, 2 Peter 2:7-8). Not withstanding, even these four were rescued on account of God's grace (Genesis 19:19). Even more, the Lord attests that the sin of ancient Jerusalem was far worse than the sin of Sodom (Lamentations 4:6, Matthew 10:15, 11:23).


Another important point to consider is that Sodom and Gomorrah was not destroyed solely because of its homosexuality (Genesis 19:4-5, Jude 1:7). Rather, it was destroyed because its daughters were arrogant, overfed, lazy, and unempathetic to the poor and needy (Ezekiel 16:49). According to recent statistics, America ranks second as the most charitable nation on earth . Lastly, God destroyed Sodom and Gomorrah by the number of righteous individuals it lacked: "For the sake of ten, I will not destroy it" (Genesis 18:32), not because of the majority opinion of its ruling class or highest court.

If a nation's high court should pass judgment on the Almighty, should you then be surprised if the Almighty should pass judgement on that court and that nation? We have crossed that line, the ground has shifted, and things are not going to be the same... we are watching a civilization approaching judgment. Jonathan Cahn (July 5, 2015)

Commenting after the White House was "bathed in [LGBT rainbow flag] colors... a sign of desecration covering the White House", Cahn makes the same mistake as his predecessors. Namely, he marries the decision of the "nation's highest court" with the will the people (i.e., "pass judgement on that court and that nation"). As we have already learned, a significant number of Americans (39%) oppose the federalization of same-sex marriage. Although not the majority, this percentage (117 million people) drastically outnumbers the five Supreme Court justices by whom the law passed. There is nothing in Scripture to support the idea that a nation has "crossed that line [into] approaching judgment" solely by the action of five individuals presiding over an earthly court.

In the West, we have moved to the point of open approval of adultery, child-killing, and homosexual intercourse. Will the open approval of bestiality be next? Probably. John Piper (March 1, 2014)

Piper reasons from Leviticus 18:20-25 where the Lord tells the wandering Israelites how Egypt and the pagan nations whom he is driving out "became defiled" by practicing adultery, child-sacrifice, homosexuality, and bestiality (zoophilia). Actually, the list is longer and begins in verse six with admonitions against incest, mother-daughter threesomes, marrying sisters, and engaging in sexual intercourse during menstruation.


Since the practice of human-animal sexual relations was last in the list, Piper implies that God will punish America only after it legalizes bestiality. However, he is not as dogmatic as Graham, Hagee, or Cahn and adds a disclaimer saying, "God himself may step in and bring to His church a great revival of radical obedience, and a great awakening to the countries of the West."


But Piper overlooked some important facts: the US Senate already repealed a military ban on bestiality in 2011 , while 39 states outlaw sex with animals . The eleven remaining states and the District of Columbia may also soon ban bestiality with the help of Ohio Senator Jim Hughes and animal welfare groups. Furthermore, animal cruelty (which includes animal sex abuse) has been a Group A felony under federal law since 2014 .


America's Supreme Court is far from passing any bestiality-friendly laws. Piper seems to be aware of this when he states, "... in fifty years the laws against bestiality (zoophilia) will have fallen the same way laws against homosexual intercourse have fallen." But even if bestiality becomes the law of the land in fifty years, does this mean that most of the population will automatically become zoophiles? If we follow the statistics in regard to homosexuality, then the answer is, no. A good example of this can be seen in the abortion trend. Abortion procedures rose to an all-time high in 1990 with 1,429,247, or roughly equal to 29.3 surgical induced abortions per 1,000 women aged 15-44. Current statistics reveal that the number of abortions performed today are identical to rates reported in 1973 when the law was enacted. Thus, the population's attitude toward abortion improved within the span of a generation (i.e., about forty years). This is a quintessential illustration of God's mercy and patience, in that he did not punish America when abortion was legalized, but rather waited for the trend to reverse itself. Will God punish a country solely because abortion, same-sex marriage, or bestiality become legal, even though it is practiced by a single digit percentage of the population? If we have learned anything from our examination of Scripture, then the answer is, no, certainly not. America can and may fall just like any nation in modern history, but it will not be the result of God’s judgment. Instead nations fall because of the natural tendency of the fallen world in which we live. Lastly, the universal body of believers in Christ transcends a nation's boundaries and laws. God bless America!