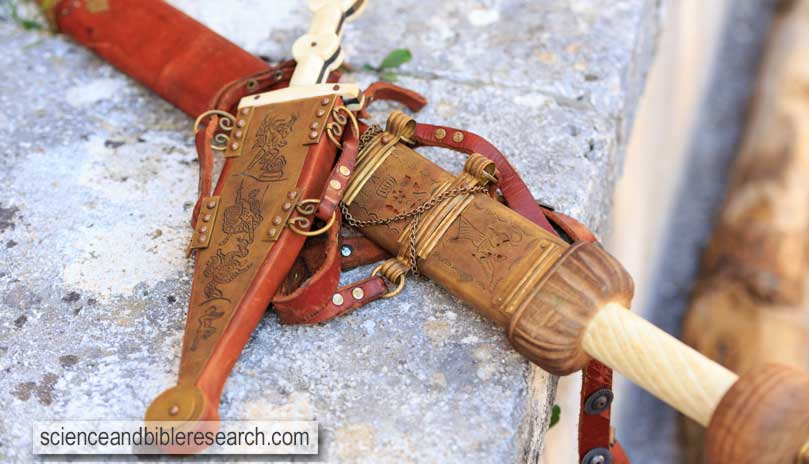 Did Jesus teach his disciples to take responsibility for their own personal defense? And if so, does this mean that Christians should enlist in the armed forces and invade foreign countries, as has been the modus operandi of American foreign policy for more than 100 years?  These are important questions to answer since an overwhelming majority (69.8%) of active-duty service members identified as Christian according to recent Department of Defense statistics.


As the Savior was nearing the end of his earthly ministry, he imparted to his disciples some practical survival instructions:

Then Jesus asked them, "When I sent you [to preach the Gospel in other cities] without purse, bag or sandals, did you lack anything?" "Nothing," they answered. He said to them, "But now if you have a purse, take it, and also a bag; and if you don't have a sword, sell your cloak and buy one."

In the passage above, Jesus essentially commanded his disciples to defy Roman law by purchasing a sword. The land of Israel in Jesus' day was a province of the Roman Empire, and possessing such a weapon was illegal .


In the three years that Jesus spent with his disciples teaching them about his kingdom, he provided for their basic needs such as food (Luke 9:10-17), money (Matthew 17:24-27), and protection (John 17:12). However, after he had finished his earthly ministry, Jesus wanted them to be responsible for their own sustenance, including personal protection. This did not mean that God would not provide for the disciples' needs in the absence of Jesus. Rather, it was an admonition against being naive and inadequately prepared in a world that would be hostile toward them (Proverbs 21:31).


It is also important to note that Jesus was not instructing his disciples to lead an armed rebellion, as some of them erroneously seem to have concluded:

When Jesus' followers saw what was going to happen, they said, "Lord, should we strike with our swords?" And one of them struck the servant of the high priest, cutting off his right ear. But Jesus answered, "No more of this!" And he touched the man's ear and healed him. Jesus Christ to his disciples in Luke 22:49-51 (circa early-60's A.D.)


In addition to self-defense, Jesus taught his disciples to flee into another city in response to systemic persecution rather than form an armed militia:

When you are persecuted in one place, flee to another. Jesus Christ to his disciples in Matthew 10:23 (circa 50's A.D.)

Since the mandate of the Christian is to peacefully bring the good news to all the world (Mark 16:15), moving to another city facilitated the teaching of the Gospel in areas previously unfamiliar with Christianity:

Those [disciples] who had been scattered [after a great persecution broke out against the church in Jerusalem-Acts 8:1] preached the word [of God] wherever they went. Luke the physician in Acts 8:4 (circa 62 A.D.)


Arming yourself for the purpose of self-defense was also a characteristic of the post-Exilic Jews who, after returning home from Babylonian captivity, were instructed to rebuild the temple in Jerusalem. During the Babylonian exile when the land rested, Jerusalem was invaded by bordering countries who divided the land and "cast lots for my people, and have traded a boy for a prostitute, and have sold a girl for wine..." (Joel 3:3). Upon their return in 538 BC to rebuild the temple, the Jewish laborers were frequently harassed by foreigners (Nehemiah 4:7-8). As a result, the Jews "labored on the work with one hand and held his weapon with the other" (Nehemiah 4:16-17).


Some might be tempted to use Nehemiah 4:16-17 as a pretext to promote the removal of foreign dictators with the goal of making it safer to practice Christianity. However, as far as the Christian is concerned, the new temple is the Body of Christ. Those who are joined to this body partake in the great commission and are instructed to be armed with the sword of the Spirit (Ephesians 6:17, Hebrews 4:12), not a physical weapon for the purpose of forcing the American way-of-life on foreign countries at the expense of millions dead, conveniently labeled as "collateral damage."


This next passage of Scripture may fool the simpleton into participating in the invasion of a foreign country under the guise of a pre-emptive attack or to spread democracy:

Let the high praises of God be in their throats and two-edged swords in their hands, to execute vengeance on the nations and punishments on the peoples, to bind their kings with chains and their nobles with fetters of iron, to execute on them the judgment written! This is honor for all his godly ones. Praise the Lord! Unidentified author in Psalm 149:6-9 (circa fifteenth to the third centuries B.C.)


When reading Scripture, it is important to follow some basic principles of interpretation. Concerning the poetic literature of the passage above, timeframe and historical context are key in arriving at an accurate interpretation. The Psalms, like the one above, were written circa 1500 BC to 300 BC. This was a timeframe when God's will was revealed either directly or through one of his anointed prophets. For example, God sometimes instructed national Israel when to attack or invade a foreign country (Joshua 6:2). Other times, he specifically instructed them not to fight (Deuteronomy 1:42).


It was during this period in history when the "assembly of the godly" (Psalm 149:1) had divine authority and license to carry out God's geo-political plan for the Middle East. Conversely, those living in the current, post-apostolic era have no such license whereby America presumes to be the police of the world. To anyone familiar with the psalms, the obvious context involves the people or nation of ancient Israel celebrating after conquering one of their enemies.


Finally, the concluding verse, "to execute on them the judgment written!" (Psalm 149:9), should topple any warmongers inclination to use the passage to justify the attack or invasion of another country in modern times. It is clear that the triumphal joy expressed by the psalm writer pointed back to "the judgement written" whereby it was divinely decreed that he would achieve his victory. In other words, the psalmist wrote Psalm 149 after the "judgment written" was fulfilled. Indeed, the Bible tells us that King David succeeded in subduing all enemy nations: "And the Lord gave victory to David wherever he went" (2 Samuel 8:6).


Thus, it is evident that according to the aforementioned passages, the New Testament elect of God are permitted to exercise self-defense in domestic matters, but is discouraged from participating in a militarized foreign invasion or armed resistance against established governing authorities (Romans 13:1-7, 1 Peter 2:17).