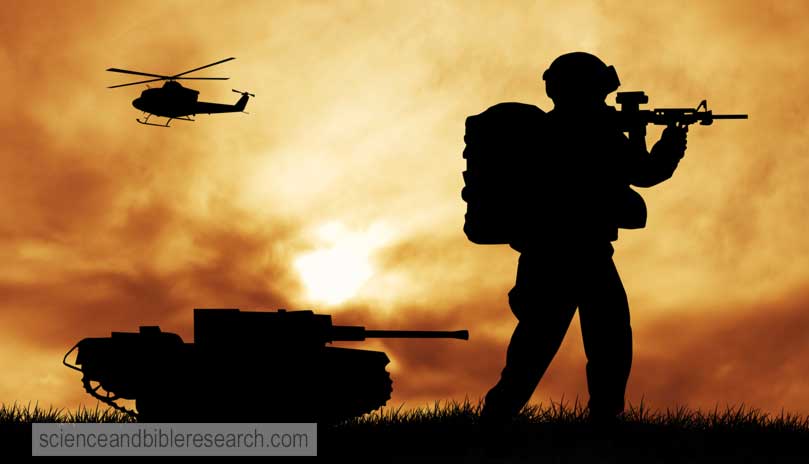 Soldiers at war (Photo by adrenalina)

Then Jesus said to him, "Put your sword back into its place. For all who take the sword will perish by the sword."

A report compiled by Open Doors , a nondenominational Christian mission organization, discovered that 2015 was the deadliest year in modern history for Christians. The Body of Christ lost more than 7,100 Christians worldwide at the hands of radical terrorist groups such as ISIS and Boko Haram . Could these needless deaths have been prevented?


Now that newly-elected President Donald Trump has deployed US Marines to invade northern Syria , it seems that this administration has learned very little from past American-military interventionist actions in the Middle East. Since ISIS and other related terrorist groups share similar ideologies, the inevitable, long-term outcome of sending US troops to fight a borderless enemy will result in more conflict and bloodshed in other countries around the world.

ISIS is one of the products, al-Nusra is another product, you have so many groups in Syria, they are not ISIS, but they are al Qaeda, they have the same background of the Wahabi extremist ideology. Syrian President Bashar al-Assad in Assad: US military forces in Syria are 'invaders'  by Joe Sterling, Jennifer Deaton and Barbara Starr, CNN (March 11, 2017)


Could the untimely deaths of Christians and innocent Muslims be prevented? To answer this question, we need to go back to the year 2003 and the US-led coalition to dethrone Iraqi leader Saddam Hussein.


In the 21st-century, God's providential protection of Christians living in a foreign country was evident in the late President Saddam Hussein's Iraq (1979-2003) . Christianity was exported from Jerusalem to the Mesopotamian region (i.e., Iraq) in the 1st-century AD by the Lord's apostles Thomas and Jude Thaddeus . Assyrian Christian communities were blessed in their native homeland for 1,963 years with relative freedom. Unfortunately, their circumstances changed for the worse since the U.S.-led invasion in 2003 by then-President George W. Bush (2001-2009):

There's no comparison between Iraq now and then... Things are the most difficult they have ever been for Christians. Probably ever in history. They've never known it like now. Reverend Canon Andrew White [The Vicar of Baghdad] in Iraq: Worse for Christians Now Than under Saddam Hussein  by Michael Ireland (July 2, 2008)

In 2003, Iraq's Christians, at 1.4 million, were among the region's most robust Christian communities. Since then, more than a million of them have fled. Nina Shea in Only America can save Iraq's last Christians  for Fox News (July 29, 2014)

Though he was surely not a paragon of freedom, Saddam Hussein's leadership of the nation saw Christians living side-by-side with Muslims and others in relative peace. All that changed during the past decade that saw Hussein's regime toppled and him executed. John F. McManus in Iraq's Christians Attacked by Militant Islamists  for The New American Magazine (July 24, 2014)


The systemic persecution of indigenous Assyrian Christians began with the invasion of Iraq in 2003. The result of then-President George W. Bush's war culminated in the ousting and execution of President Saddam Hussein. This caused a power vacuum that was quickly filled by terrorist groups who began to murder Christians and burn down their churches.


Saddam's Deputy Prime Minister, Tariq Aziz (born Mikhail Yuhanna to a Chaldean Catholic family in northern Iraq and later adopted a Muslim name to appeal to the Ba'th Party's predominantly Muslim membership ), revealed the hypocrisy of the Bush Administration's Iraq war in an interview when he stated:

North Korea has admitted to having a secret nuclear program. The United States is not asking that North Korea be inspected in the way they are asking for Iraq to be inspected. Why? Because there are two things absent in North Korea: oil and Israel. The reason for this warmongering policy toward Iraq is oil and Israel. Deputy Prime Minister Tariq Aziz in THREATS AND RESPONSES: BAGHDAD'S VIEW; Citing North Korea, an Iraqi Aide Says 'Oil and Israel,' Not Weapons, Spur the U.S.  by John F. Burns (October 22, 2002)


The current Christian persecution that is being perpetrated by the Islamic State of Iraq and Syria (ISIS) is a result of US President Barack Hussein Obama's failed Middle Eastern interventionist policy. Prior to capturing the Iraqi city of Mosul in June, ISIS rebels in Syria fighting to overthrow al-Assad's government were supplied with American taxpayer-funded weaponry by Obama .


Islamic Caliphates of the past did not always persecute Christians. For example, "After the Arab conquest of Persia (637 AD), the Caliphate recognized the Church of the East as a millet, or separate religious community, and granted it legal protection. Nestorian [member of a Christian sect originating in Asia Minor and Syria] scholars played a prominent role in the formation of Arab culture, and patriarchs occasionally gained influence with rulers. For more than three centuries the church prospered under the Caliphate..." 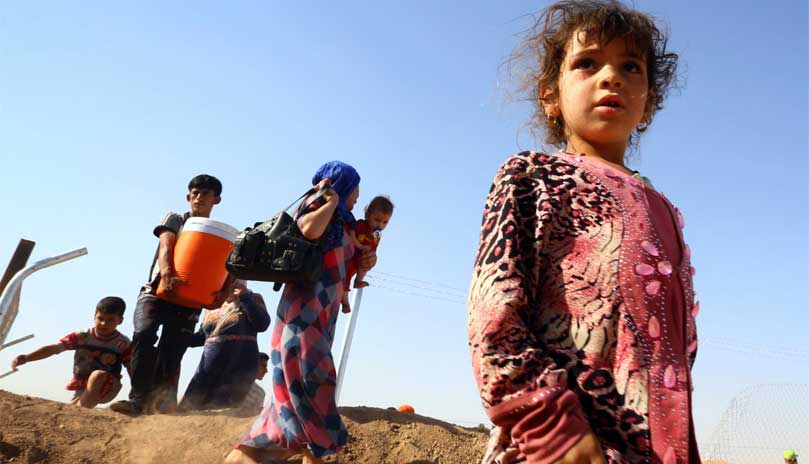 Christian families fleeing their centuries-old homes in Mosul, Iraq as a result of the violent persecution by ISIS (Photo by Reuters)

The persecution of Christians also spread throughout the neighboring Middle Eastern countries of Syria, Libya, and Egypt during the Obama-facilitated Arab Spring riots which began in 2010.


Syria is another Middle Eastern country where Christians trace their roots to the disciples of the Lord in the 1st-century AD. For example, the disciple Ananias was preaching the Gospel in Damascus even before Paul's conversion (Acts 9:10-12). The Syrian-Christian minority is provided "protection by a secular-leaning dictatorship" under President Bashar al-Assad (2000-present). However, as a result of the Arab Spring riots that began in December 2010, Sunni-led opposition has forced thousands to flee their homes in fear of retribution for their noncompliance in al-Assad's overthrow. Islamist militants expelled almost all of the 80,000 local Christians from the city of Homs, which is located 162 kilometers north of Damascus (Brode, et al., 2012 ).


The country of Libya, evangelized by the apostle Simon the Zealot in the 1st-century AD , also plunged into civil war during the Arab Spring, and resulted in the current persecution of Christians. For example, almost 75 percent of the Christians fled the country since the Libyan government was overthrown by the Obama administration in October of 2011. Recently, near the city of Benghazi, "Gunman reportedly went knocking door-to-door hunting down the Christian residents, mercilessly executing any Jesus-followers they found" (Lee, 2014 ).


Coptic Christians in Egypt are also under attack after the Arab Spring-Obama facilitated ouster of President Hosni Mubarak in February of 2011. Obama reportedly sent an envoy that "urged Mubarak to announce he won't run for reelection later this year" (King, et al., 2011 ). As a result of Egypt's sociopolitical instability, "40 churches were wrecked, burned and looted in a pogrom-like wave of attacks in August [2013], blamed on Islamic militants. Coptic leaders say the attacks are the worst in centuries" (Associated Press, 2013 ).


Here is what we can do for our persecuted brothers and sisters in Christ:

Call or write your senators and congressman urging them to send humanitarian relief and provide a safe haven and asylum to Christian refugees.

Compel the US government to pressure Muslim countries to amend their laws and grant Muslim-Christian converts the same rights as Muslims. Persecution of Muslims who convert to Christianity is a gross violation of their God-given Human Rights.

Vote for and support public candidates who reject American imperialist-interventionist foreign policies, such as Rand Paul  and the Libertarian Party.

Pray that God will bless your faith-actions.


In conclusion, history reveals that the current, 21st-century persecution of Middle Eastern Christians is not the result of the Devil, the anti-Christian world system, or Islamic governments. Rather, it is the net effect of woefully mis-guided and unconstitutional US foreign interventionist policies. US military activity and involvement in the Middle East must be discontinued. Wars bring only death and destruction. The pagan Roman Empire and apostate Jews in the 1st-century AD could not destroy the Church of Christ when it consisted of only 11 members (Matthew 16:18). Through non-violence and self-sacrifice, Christianity became the official religion of the Roman Empire in 380 AD. In the same way, Christians today can continue to influence the world for Christ just as the apostles did almost 2,000 years ago (Romans 1:8)... "Not by might nor by power, but by my Spirit, says the Lord Almighty" (Zechariah 4:6, Luke 9:54-56, Ephesians 6:17).